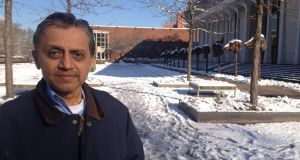 Ashoka Mody, economics professor at Princeton University, New Jersey, said a crackdown on tax shifting by US authorities was the most likely source of pressure on Ireland

Ireland rebounded so robustly from the financial crisis due largely to its favourable corporate tax regime, according to Ashoka Mody, the former head of the IMF mission in Ireland. That means international tax reform now threatens a “big setback” for the economy.

Pointing to US research which identified Ireland as a tax haven, Mr Mody said no one knows the exact impact of the large flows of foreign investment into the economy “because much of their activity centres around shift profits, but the Irish economy benefited greatly through enhanced tax revenues”.

Mr Mody, the senior IMF official in charge of its relationship with Ireland when the crisis broke, said in an interview with The Irish Times that “it is hard to say what will eventually force Ireland to raise its corporate tax rates”.

No international agreement has clear jurisdiction over Ireland’s right to choose its tax rates, he said, and Irish authorities “have thumbed their noses at those who call on Ireland to ‘harmonise’ and ‘co-ordinate’ tax rates”.

He said in his view a crackdown on tax shifting by US authorities was the most likely source of pressure on Ireland. The US has recently introduced sweeping changes in its tax policies and is also a key supporter of change in the tax reform discussions now under way at the OECD.

Mr Mody, now visiting professor in international economic policy at Princeton, referred to research by University of California economics professor Gabriel Zucman. This branded Ireland as one of the EU’s “tax havens” based on the massive levels of profit reported here by US firms, which are a multiple of those of domestic companies. Mr Mody said the Irish economy – and especially the public finances – is vulnerable to the changes that are now likely to be on the way.

A long-time critic of austerity, he said that “all but the most stubborn pro-Europeans have stopped claiming Ireland as a success of their austerity-structural reform model”.

Ireland is going back to the model before the financial crisis, as Dublin real estate prices rise

“Complacent Irish authorities have taken the easy approach,” he said. “They have not invested in a growth model that creates long-term domestic capabilities.”

With Brexit on the way, “Ireland seems to be benefiting from the inflow of operations leaving the UK,” he said.

“Ireland is going back to the model before the financial crisis, as Dublin real estate prices rise. The last time around things ended badly. Perhaps, this time will be different?”