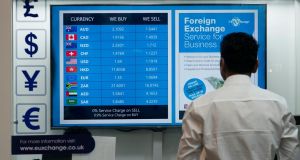 A currency exchange board in London: Sterling has fallen by as much as 2.7 per cent to as low as 91.9p against the euro – a level not seen in almost two years – since Boris Johnson took office. Photograph: Will Oliver

The prospect of a disorderly Brexit is still not fully priced into currency markets, a senior Central Bank official has said, even as sterling has been sold off by traders since Boris Johnson became British prime minister last week.

“I think the movements in the sterling exchange rates have clearly, more than anything else, reflected the increasing probability of a no-deal Brexit,” said Mark Cassidy, director of economics and statistics at the bank as it unveiled its latest quarterly bulletin.

However, he said the state of the currency markets would still indicate that the UK crashing out of the EU “is not necessarily the most likely outcome at the moment”.

Sterling has fallen by as much as 2.7 per cent to as low as 91.9p against the euro – a level not seen in almost two years – since Mr Johnson took office last Wednesday and rejected outright the EU withdrawal agreement and the Irish Border backstop drafted under his predecessor, Theresa May.

The exchange rate has slumped about 18 per cent since UK voters decided in June 2016 to quit the European Union and some traders have predicted that it could reach – or even breach – parity under a chaotic Brexit. Sterling is currently changing hands at its lowest rate against the dollar since March 2017.

The Central Bank warned that a no-deal Brexit may push economic growth down to 0.7 per cent next year, against current forecasts that gross domestic product would expand by 4.1 per cent.

Although an outright Irish recession would be averted, the pace of the slowdown would be “a significant shock for the economy”, Mr Cassidy said.

Central Bank officials said preparing estimates around a disorderly Brexit has been extremely difficult as there is no historic context to test assumptions against. Their central forecasts are based on an accord being reached before the UK is scheduled to leave the EU at the end of October.

On that basis, there is a material risk of the economy overheating, as stronger-than-expected labour market and export figures so far this year indicated that it is running close to full tilt.

“We are much closer to full capacity than previously thought,” said Mr Cassidy, as the Central Bank raised its full-year economic growth forecast to 4.9 per cent from 4.2 per cent. It is now predicting 4.1 per cent gross domestic product (GDP) expansion in 2020, compared to 3.6 per cent previously.

Echoing recent calls from the Economic and Social Research Institute (ESRI) and Irish Fiscal Advisory Council (Ifac) on the Government to take money out of the flat-out economy, the Central Bank report said: “Appropriate macroeconomic management can help navigate these challenges and fiscal policy can play an important role in containing excess demand and avoid placing excessive strain on an economy operating close to capacity.”

The report said that it would be “more prudent” for the Government to save rather than spend fiscal windfalls – with multinationals accounting for more than three-quarters of corporate tax receipts last year – to build up buffers in the event of a future downturn.

“Failure to run sufficient surpluses during phases of good economic performance may limit the room for manoeuvre in the future,” it said. “The current strong economic performance is to be welcomed but, to ensure that the economy remains on a sustainable growth path, it is important that fiscal policy be proactive in mitigating pro-cyclical dynamics.”