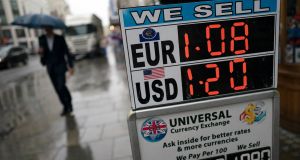 A currency exchange board in London on July 30th, 2019. The pound has slumped against the dollar and euro. Photograph: Will Oliver

The stark difference in the economic outlook for next year with or without a no-deal Brexit is clear from the latest quarterly from the Central Bank. If we avoid a no-deal exit, the economy – as measured by gross domestic product – could grow by 4.1 per cent next year, it estimates. However, were the UK to crash out at the end of October, the economy might grow by just 0.7 per cent.

That is one heck of a difference. One scenario threatens economic overheating, the other a sharp slowdown in growth, a possible flirting with recession and 34,000 fewer jobs than there would otherwise be.

Unfortunately, the more malign scenario is starting to feel all too real. For the last couple of years, there was always this underlying hope that no matter what madness was going on between London and Brussels, a no-deal Brexit was so potentially mad and damaging that it would be avoided.

And maybe it still will. But a good marker of the mood is the trend in sterling, and it has dropped significantly in recent days, nearly touching 92p against the euro on Tuesday. Somewhere, there may be a tipping point where markets decide to fully price in a no-deal exit, in which case we will all need to hold on to our hats. If we reach this point, it will have a significant impact on confidence.

And this confidence factor is what makes the impact of a no-deal so hard to assess. Just look at the variation in the forecasts between the Central Bank – expecting a four percentage point hit to growth in the first year after a no-deal Brexit – and the Department of Finance/Economic and Social Research Institute forecasts which see a smaller 2.4 percentage point impact, over a longer two-year period. The Central Bank's jobs estimates highlight the cost of this, with 34,000 fewer estimated by the end of 2020 and 100,000 fewer in work over a decade.

Both sets of forecasts factor in a hit to trade. The reason the Central Bank is more pessimistic is that it also counts in a big hit to business and consumer confidence. As the bank says in its latest quarterly bulletin, predictions are difficult because there is no precedent to a Brexit-type event and because the impact on the economy will vary significantly from sector to sector and region to region.

Most exposed will be the food sector, many SMEs in sectors like engineering and rural Ireland. Least exposed will be the major cities, at least in terms of the direct impact. But the headlines, the short-term disruptions and a potential sterling collapse could all hit general economic confidence and start to be reflected in areas as diverse as consumer spending, car purchases, the property market and so on.

We just don’t know because – like the trend in sterling now – our economic performance after a no-deal would be affected by political events which are very hard to forecast. What happens in the months after a no-deal Brexit? Do the two sides quickly come back to the table, or is there a stand-off? Will the penal tariffs on imports signalled by the UK government be introduced and will they be maintained?

The Central Bank is correct that it is likely to push the exchequer into deficit for next year, partly due to supporting affected sectors. The bank warns that this needs to be managed without damaging confidence in our long-term management of the public finances. And this is correct. But when you don’t know what you are facing in to, it is very hard to plan.

But even with all we don’t know, the Government needs to start getting out some messages. One is that the budget has to be framed against the real prospect of a no-deal Brexit – and so needs to focus on preparing for this. The second is that significant sums are going to have to be spent supporting affected sectors – notably beef, some other parts of the foods sector and smaller exporters. The third is that this will cost significant sums, so don’t expect tax cuts.

And finally, the Government needs to prepare people for the fact that it simply won’t be able to combat some of the early upheavals – from delays at customs, ports and airports, for example, to hits to supply into Ireland in some areas and a myriad of questions about what happens next.

Signalling uncertainty – and abandoning the normal tendency of Irish governments to promise to “ look after” everything – has a cost in itself in terms of confidence. But it is better than heading into a series of shocks which catch everyone unawares.

A potentially decisive shift in expectations for the shape of Brexit is under way. Boris Johnson’s apparent willingness to head for a no-deal exit may be crazy, but that doesn’t mean it can’t happen. If the markets become convinced this is going to happen, then sterling will fall further – quickly. Sterling is the canary in the coal mine warning us of the risks we face heading into the autumn.

1 Should my mam wait for house prices to drop before buying?
2 US ‘hard seltzer’ drink White Claw launches in Ireland
3 Citigroup warns that markets are out of step with reality
4 Chris Johns: Past is another country when it comes to our post-pandemic future
5 ‘I’m so lucky to be in the Caribbean – a million miles from Derry Girls’
6 ‘The recovery needs to be a full-scale economic renewal’
7 If you injure yourself working from home, is your employer responsible?
8 Michael Smurfit: ‘I asked Trump to invite me to the White House for my 80th birthday’
9 Household savings soar as consumers stop spending
10 Joint accounts: if one of us dies, can the other access the money?
Real news has value SUBSCRIBE