How vulture companies tried to influence the Department of Finance 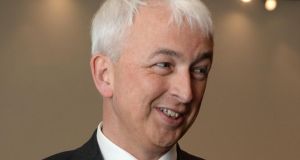 Beverly Hills-based real-estate group Kennedy Wilson, which led the first wave of overseas buyers of Irish property after the crash, was in the vanguard of firms that pushed back against the Department of Finance’s plans to increase taxes.

The tax vehicles, the London-listed Kennedy Wilson Europe Real Estate had told investors in its annual report, “were exempt from any Irish tax on income and gains”.

The company, which counted John F Kennedy’s nephew Bobby Shriver as an adviser, acquired Bank of Ireland’s real-estate business in June 2011 before it joined four other North American investors to buy 35 per cent of the bank itself for €1.1 billion.

Kennedy Wilson rejects charges that it is a vulture fund. It came to Ireland in 2011 buying, amongst others, the cylindrical Gasworks apartments in Dublin’s Ringsend. A year later, it bought its first distressed loans: €360 million of former Bank of Scotland (Ireland) debt, paying 17 cent in the euro.

Kennedy Wilson’s top Irish executive, Peter Collins, and finance chief for Europe, Fraser Kennedy, met department officials on August 26th to air their concerns. Later, Collins wrote to Minister for Finance Michael Noonan pointing out that institutional “were first to support the market” when Ireland was on its knees.

Changes to “well-established” rules, he warned the Minister just a week before the Budget in October, would “have a very negative impact on the perception of Ireland as being a stable and reliable market in which to invest”.

The former lawyer, whose passions run from distressed investing to ballet, has been one of the most active buying up Irish portfolios in recent years, most of which has ended up in an Irish Icav known as Targeted Investment Opportunities.

In 2016, Oaktree bought two portfolios – Project Emerald and Project Ruby – with a par value of €4.7 billion from Nama, secured mostly against commercial properties, including a number of apartment blocks in Dublin.

One of the debtors, Galway developer John Lally’s Lalco, recently told 16 tenants in the Strand complex in Limerick that they had to leave by mid-April as Oaktree wanted the company to sell the apartments with vacant possession. Lalco withdrew the termination notices last week.

Oaktree is best known for linking up with Nama and property company Bennett three years ago to develop land in Dublin’s docklands, including €450 million worth of offices and 158 apartments on land near Facebook’s European headquarters.

Oaktree’s first concerns about the Department’s of Finance’s plans came in a hand-delivered letter on October 5th. On November 21st, the head of Oaktree’s Irish operation Tony Noonan sought a meeting with the department and Revenue.

In a letter two days later, Bickle told the department and the Revenue Commissioners that the Government’s move would “seriously undermine and jeopardise” its plans and “give a clear message” to international investors that Ireland’s business rules are “unpredictable”.

Oaktree’s executives and lawyers met with department officials on November 25th. Two days later, Tony Noonan followed up with a letter. “The timing of these changes and the way they have been introduced could not have been worse,” Noonan said. “We have a great opportunity with Brexit to capture a big slice of the UK financial services market as many will look to move their headquarters to an EU jurisdiction such as Dublin.”

CarVal Investors, which has invested nearly $100 billlion (€93 billion) in distressed debts in 76 countries over the last three decades, cropped up on the radar in Ireland in 2012 when it bought a share of a €380 million Bank of Ireland (Scotland) debt portfolio sold for a quarter of its original value.

Later, it bought billions of loans from Nama and Irish Bank Resolution Corporation’s liquidators, including a portfolio of non-performing property loans held by doctors, dentists and other professionals, along with buy-to-let mortgages sold off by Lloyds as it quit the Irish market.

On September 27th, CarVal executive Bobby O’Brien, a former Bank of Ireland debt expert, emailed the Department of Finance warning that the move upon special purpose vehicles used to house acquired loans had “retrospective” effect and would affect future international interest in Ireland.

This was followed up by a meeting on October 5th between Irish officials and CarVal executives, including David Chung, the firm’s managing director of tax. A number of emails went back and forth.

CarVal had a further meeting with officials on November 7th. They warned officials that claims by Opposition TDs on how much tax could be squeezed out of vulture funds were “excessively inflated”.

The officials agreed, noting that Noonan had budgeted for getting an estimated €50 million from the change this year, but no more. On November 10th, Chung emailed the Department of Finance, asking for “15 minutes at any time today” to share some data. “Please don’t hesitate to call if you do,” Chung wrote. “I’m in Dublin today; fly back this evening.”

Hammerson made a splash when it came onto the Irish scene in late September 2015, when it and German insurer Allianz agreed to buy €1.85 billion worth of loans attached to the Dundrum Town Centre and 50 per cent stakes in the Ilac and Pavilions shopping centres in Dublin.

A year later, Hammerson executives Simon Betty, head of the Irish operation, and Timon Drakesmith, Hammerson’s chief financial officer, met with the Department of Finance to “air their concerns regarding potential changes to the funds regime in Ireland”.

By then, Hammerson and Allianz had taken direct control of Dundrum, under a consensual debt-for-equity swap with Joe O’Reilly’s Chartered Land, the developer behind the property.

Meanwhile, it was also converting debt into equity stakes in the Ilac and the Pavilions. Drakesmith followed up on October 26th, six days after the Finance Bill containing details of how funds would be affected by the changes, with an email to the department complaining about how its pleas for existing transactions to be exempted had been ignored.

“[This] is disappointing and significantly impacts the value of historic transactions, and undermines one of the cornerstones of Ireland’s offering to international investors, being certainty of regime and stability.”