Sterling’s rally evaporates on doubts about getting Brexit deal approval 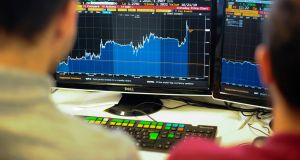 Sterling pulled back from a five-month high after the DUP said it will vote against the deal secured in Brussels Thursday. UK stocks also gave back gains while government bonds steadied.

Prime Minister Boris Johnson’s predecessor Theresa May saw her own deal rejected by Parliament three times, eventually toppling her leadership. Pulling it off would pave the way for an end to the political drama that has roiled UK markets for the past three years, while a rejection would open up the prospect of an imminent election or even a no-deal Brexit.

“The deal is announced but the key hurdle of the deal being voted into the UK Parliament remains, hence the limited gains in the pound in response,” said Petr Krpata, chief currency strategist at ING Groep NV. “With the DUP not changing its position, it is questionable whether the deal will get through the Parliament.”

UK markets have been in the grip of Brexit since 2016 with the pound being the main sentiment barometer – it plunged to its weakest since 1985 in a flash crash in October that year. Sterling is still down 13 per cent since the referendum, while the FTSE 100 share index has rallied 13 per cent as a weak currency boosts British firms’ overseas earnings.

The pound traded 0.4 per cent higher at $1.2878 by 12:20 p.m. in London, after touching the highest since May 13th. The currency is still heading for the biggest rally over seven days since 1985. Yields on UK 10-year government bonds gained one basis point to 0.73 per cent. Uncertainty over the split with the EU had buoyed demand for the safety of sovereign debt, fueling a gilt rally that almost halved benchmark yields in the past three years.

The FTSE 100 stock index gained 0.4 per cent, led by banks and builders, while the more domestically-focused 250 Index rose 0.8 per cent to a one-year high. UK lenders’ riskiest notes jumped, with Barclays Plc’s 5.875 per cent CoCo reversing earlier losses and hitting 99.5 pence on the pound, the highest since May 2018, according to data compiled by Bloomberg.

All eyes on UK Parliament

European leaders plan to assess the agreement as they meet at a summit starting Thursday. Investors’ main focus will instead be on reaction from UK lawmakers ahead of an emergency parliamentary session slated for Saturday.

That’s not a given as Johnson does not have a majority and lawmakers remain divided on Brexit. Pound traders aren’t ready to drop their guard yet. As the accord means little unless backed by UK lawmakers, one-week sterling hedging costs remain close to the highest since the 2016 referendum.

Approval at the weekend sitting by the UK Parliament, the first Saturday debate since the Falklands conflict in 1982, could drive a renewed pound rally to $1.40, the highest since early 2018, according to Mizuho Bank Ltd.

“Betting on further volatility still looks like a decent prospect, and better than taking a position in the spot price,” said Stephen Gallo, head of European currencies strategy at the Bank of Montreal. – Bloomberg