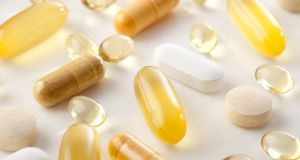 Certain supplements for specific groups will be exempt from the new VAT treatment.

Food supplements used by slimmers, sportspeople and bodybuilders will be hit with VAT in the Finance Bill in a move that could raise close to €10 million for the exchequer.

The Department of Finance has confirmed that a 13.5 per cent tax will be levied on the supplements when the Bill is published on Thursday. There was no mention of supplements in Minister for Finance Paschal Donohoe’s budget speech though some move to tax them had been expected.

A report from the Tax Strategy Group ahead of the budget had said there was no legal basis in the EU for a zero rate on what, in 2016, was a €60 million market for supplements.

Certain supplements for specific groups, such as baby milk formula, as well as folic acid and other vitamins and minerals classified as medicines, as well as fortified foods, will be exempt from the new VAT treatment.

The news comes as a blow to two of Ireland’s largest listed companies, Glanbia and Kerry Group, both of which are involved in the protein business.

Kerry is a major producer of whey, a by-product of cheese-making. Whey protein is the base ingredient for most protein powders users by bodybuilders and sportspeople.

For Glanbia, performance nutrition, essentially protein products, is one of two key global growth areas and has been responsible for delivering higher margin sales to offset falling sales and earnings from cheese and and ingredients.Global sales last year were €1.18 billion. the company does not break out its Irish sales but these are understood to be a small fraction of total sales.

A spokeswoman for Glanbia said: “We await the publication of the Finance Bill to ascertain the range of products impacted by the new measures and will evaluate accordingly.”

Kerry said that it did not expect to be strongly impacted by the measure as it was not directly in the supplements market.

The Irish Health Trade Association, which represents manufacturers, importers, and distributors in Ireland, expressed dismay at the decision.

“We believed that the absence of this in Budget 2020 was in recognition of the damage which a no-deal Brexit will have on the cost of food supplements,” said Phil Costigan, general secretary of the trade body. “The Minister assured the Irish public that this was a ‘Brexit budget’ in order to protect citizens. Nothing could be further from a no-deal Brexit budget than this decision.”

“This savage increase will see a major decline in health supplement consumption, a massive knock-on impact on the health of citizens, and a dangerous move to online unregulated purchases and a threat to hundreds of retailers across Ireland.”

Matt Ronan from umbrella group Health Stores Ireland described it “as a slap in the face for health conscious consumers”.

“Taxing people as they attempt to safeguard their own health regardless of their ability to afford such a tax has to be seen as a very cynical exercise,” he said, while calling on finance committee members to veto the proposal when it comes before them.

The Finance Bill gives legal effect to the various measures announced in last week’s budget. However the Government said the Bill, which runs to 75 sections, will also include a number of measures not announced by Mr Donohoe on budget day.

The Minister also plans to close a loophole in the Dwelling House Exemption rule which emerged in a recent court case. The exemption is designed to allow a person remain in a house they have shared with a relative after their death, without paying capital acquisition tax.

Among the conditions for the relief was that the beneficiary owned no other property. Revenue held that this includes other property the person might receive in the same will but the High Court ruled otherwise in a case earlier this year.

The Bill also provides for a series of anti-avoidance measures in relation to real estate investment trusts (Reits) and property funds.

While Reits are normally exempt from capital gains tax (CGT) on value increases of property within their portfolios, that relief evaporates if they are bought and cease to be a trust within 15 years of being established, according to the new rules.

The Bill will also make further changes as required by the EU Anti-Tax Avoidance Directive (ATAD) and incorporates certain OECD reforms in relation to transfer pricing practices by multinationals.

Mr Donohoe, who is on a trip to the US, said: “The Finance Bill 2019 sets out the legislative provisions to bring effect to the tax measures announced in Budget 2020 against the background of uncertainty posed by Brexit.”

“Nevertheless we are safeguarding the hard-won progress of recent years in stabilising the public finances,” he said. “The Finance Bill implements a range of targeted tax changes including specific measures to support business and to address climate change,” he said.

“The Bill also contains a number of anti-avoidance and administrative changes to the tax code in order to protect and enhance the integrity of our tax base,” Mr Donohoe said.