Brexit: A deal is reached but many challenges remain

The European Union's Brexit negotiator Michel Barnier outlines the main elements around the Brexit deal agreed between the EU and the UK. Video: EU Commission 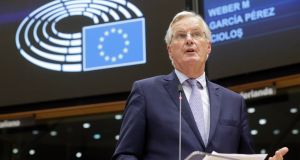 The United Kingdom and the European Union have reached a Brexit deal but senior EU figures are holding out no prospect that leaders in the union, including Taoiseach Leo Varadkar will formally ratify it immediately.

Speaking to journalists in Brussels this morning, a senior EU official told journalists the leaders will discuss the Brexit package this afternoon but said time would be needed for a proper consideration of legal texts.

The best that British prime minister Boris Johnson can hope for ahead of Saturday’s crucial Commons sitting, observers say, is broad support for the thrust of any agreement if reached, and a willingness by the leaders at a later stage to reconvene either to ratify a deal or discuss an extension.

Mr Johnson will be required, in the absence of a formal deal, to apply for an extension beyond the October 31st deadline.

However, figures in Brussels hope Mr Johnson will put the outline agreement to the House of Commons for an indicative vote when it meets on Saturday – for the first time since the Falklands War.

The EU leaders will convene in Brussels this afternoon and take the Brexit issue as their first debate.

They will initially be addressed by Mr Johnson and then reconvene in so-called Article 50 format of 27 leaders.

The senior EU source would not be drawn on the question of outstanding issues in the talks, widely reported to be the VAT regime for the North and the consent issue, although he did suggest that chief EU negotiator Michel Barnier last night told ambassadors the consent issue has been resolved.

He stressed however the importance of dialogue between Dublin and London on the issue.

The EU has insisted in the past that the modalities of any consent mechanism are largely a matter for the UK although, and any agreement on Brexit cannot be conditional on approval of any other body.

The official also insisted that any agreement would be based on the preservation of the Belfast Agreement in all its aspects, the protection of the EU single market and the all-Ireland economy.

Last night, Mr Barnier was able to reassure ambassadors of the EU27 – all bar the UK representative – that the deal being worked on contained such guarantees.

He said leaders would discuss the ratification process and the possibility that even if agreed by today that would not be possible by the end of October.