Barnier and UK counterpart agree to intensification the discussions 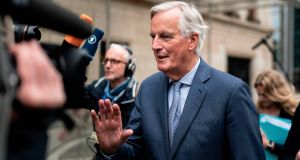 Talks between European Union and UK negotiators will continue over the weekend in Brussels as the two sides embark on a round of intensive efforts to reach an agreement on Brexit.

Following the breakthrough at the meeting between Taoiseach Leo Varadkar and British prime minister Boris Johnson on Thursday, EU chief negotiator Michel Barnier met British Brexit secretary Steve Barclay in Brussels yesterday and agreed that there would be an intensification of the discussions.

EU ambassadors were told by Mr Barnier that sufficient reassurances had been received from the UK to turn the existing “technical talks” into fully-fledged negotiations which would proceed over the weekend.

Mr Barnier will continue to brief member states and the European Commission about the progress of the talks, a sign of caution on the EU side.

Both the British and Irish governments remained tight-lipped last night on the progress of the efforts to reach an agreement and on the nature of any changed British position.

However, it is believed that the UK is now open to a form of customs arrangement involving Northern Ireland which would avoid any customs checks on the island of Ireland. This would allow the North to legally leave the EU customs union, while administering EU customs checks and rules where necessary on goods destined for the single market.

The EU is thought to be concerned, however, that the checks should adequately protect the single market and customs union, while there are also doubts that Mr Johnson could get any new deal through the British parliament.

There are also questions over how any consent mechanism for Stormont would work, though the British Northern secretary Julian Smith has said that one community could not have a veto over Brexit, and stressed the need for cross-community agreement.

After a period of silence yesterday, the DUP issued a statement last night which reserved judgment on the contents of any new deal.

The statement from party leader Arlene Foster said her party “will always exercise our considerable influence in ensuring we stand up for Northern Ireland”.

“We will only ever consider supporting arrangements that are in Northern Ireland’s long-term economic and constitutional interests,” she said.

Ms Foster said her party was regularly in touch with Mr Johnson, who is “aware of our views”. However, she did not explicitly rule out the customs arrangements which have been speculated on.

Quizzed by journalists in London, Mr Johnson would not be drawn on the nature of any new proposals he had made to break the logjam.

Asked if his new proposals would still mean the North leaving the customs union Mr Johnson said: “I can certainly tell you that under no circumstances will we see anything that damages the ability of the whole of the United Kingdom to take full advantage of Brexit”.

The talks in Brussels take place ahead of a crucial summit of EU leaders next Thursday and Friday. EU ambassadors will meet on Monday and ministers on Tuesday to prepare the discussions for the meeting. If no agreement is reached – which sources speculate is unlikely in the time available – the leaders may decide to defer consideration of a possible extension until closer to the end of the month to allow talks to proceed.