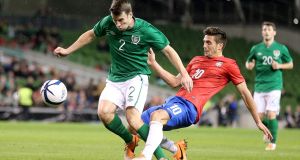 The Aviva Stadium is scheduled to host three group games and one Round of 16 game in what, the study said, will be the biggest sporting event to be held in the State. Photograph: Cathal Noonan/Inpho

Dublin’s hosting of several games in next year’s UEFA Euro 2020 tournament will be worth an estimated €106 million to the economy, according to a study by economic advisory group EY-DKM.

With an expected global audience of five billion for the tournament, Dublin’s participation will represent a unique opportunity to showcase the city and country to the world, the report said.

The Aviva Stadium is scheduled to host three group games and one Round of 16 game in what, the study said, will be the biggest sporting event to be held in the State.

It is anticipated that between 76,000 and 96,000 additional tourists will visit Ireland during the two-week period between June 15th and June 30th, with the average stay estimated to be about six nights.

The study estimated that the tournament would result in the creation of 2,780 jobs before and during the tournament as a result of additional tourism and organisational spending.

The economic impact study estimates that for every €1 of public spending, the tournament will generate €4 of additional revenue for the exchequer.

1 Michael Smurfit: ‘I asked Trump to invite me to the White House for my 80th birthday’
2 ‘The recovery needs to be a full-scale economic renewal’
3 Ryanair expects air fares to fall when flights take off again
4 Minister calls for EU to act against tobacco firms ‘undermining’ menthol ban
5 ‘I’m so lucky to be in the Caribbean – a million miles from Derry Girls’
6 Lioncor gets planning permission for ‘house of Europe’ project
7 Small businesses are cannon fodder in zealous anti-virus experiment
8 Consumers hesitant about travel as Covid-19 restrictions ease
9 Household savings soar as consumers stop spending
10 Tobacco makers still trying to make a mint from menthol market
Real news has value SUBSCRIBE