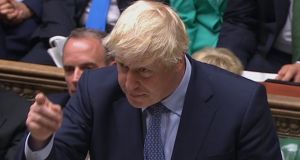 British prime minister Boris Johnson said in the House of Commons on Wednesday he had discussed alternative arrangements for the post-Brexit border with Taoiseach Leo Varadkar in New York on Monday. Photograph: PA Wire

The Government may need to hold a supplementary budget early in the New Year if Brexit delivers a major shock to the Irish economy, which could push it into recession, the Economic and Social Research Institute (ESRI) has warned.

In its latest quarterly commentary, the think tank said the Irish economy could contract by up to 1 per cent next year if the UK’s exit process from the EU turns messy, resulting in a disruption to supply chains and further turmoil on financial markets.

This is the most negative reading yet of the short-term consequences of Brexit on Ireland and comes just two weeks before Minister for Finance Paschal Donohoe is due to unveil his budget for 2020.

“If the nature of Brexit results in a significant and adverse shock for the domestic economy then a stimulatory budget may be required,” the ESRI said.

Mr Donohoe has already signalled he will have a budget day package of €2.8 billion on October 8th, but will borrow more to fund contingency measures to deal with a no-deal Brexit if needed.

These contingency measures are expected to be used to support at-risk sectors of the economy, such as in the small business, agriculture and tourism sectors.

The ESRI’s Kieran McQuinn said October’s budget was technically only a draft, which could be amended later in the year, but if external conditions changed substantially a supplementary budget could be required.

In its latest assessment, the ESRI upgraded its growth forecast for the Irish economy to 4.9 per cent for this year, saying the economy was continuing to perform in a “robust manner”.

However, it cautioned that headline growth was once again being flattered by multinational activity and that the domestic economy was showing signs of slowing after several years of rapid growth.

It also revised down its forecast for housing completions from 23,500 to 21,000 for 2019, suggesting the fall-off in supply could be linked to Brexit and/or a slowdown in house price inflation.

It also suggested that the Government’s 3 per cent vacant-site levy, introduced this year, needed to be increased if it was to thwart land hoarding and unlock further development land for housing.

As the political impasse continued over Brexit, British prime minister Boris Johnson challenged opposition parties to vote no confidence in his government on Thursday and trigger a general election.

He said the opposition was seeking to delay Britain’s departure from the EU and to prevent his government from increasing spending on health and policing. Signalling his intention to frame the next general election as a contest between the people and parliament, he appealed to the public watching proceedings at Westminster.

“The people outside this place understand what is happening. They know that nothing can disguise the truth about this parliament,” he said.

In emotionally charged exchanges, female opposition MPs accused the prime minister of putting them in danger by using provocative language. But Mr Johnson dismissed the criticism as he referred repeatedly to a law aimed at preventing a no-deal Brexit as a “surrender act”.

“I’ve never heard so much humbug in my life,” Mr Johnson said.

The prime minister also told parliament he had discussed so-called alternative arrangements for the post-Brexit border with Taoiseach Leo Varadkar in New York on Monday.

“It would be overoptimistic to say that that alone can solve the problem,” Mr Johnson said. “There remain difficult issues about customs and we must make progress on that issue.”