Planet Business: Another week of airport hell, this time courtesy of Thomas Cook 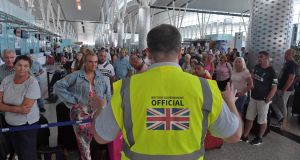 Holiday misery: A British government official speaks to tourists booked with Thomas Cook as they queue on Monday at an airport near Tunis. Photograph: Fethi Belaid/AFP

Image of the week: Thomas Cooked

Welcome to “Operation Matterhorn”, a name once ascribed to a US bombing of Japanese forces in 1944, but now the codename for UK Civil Aviation Authority efforts to get its holidaymakers out of Europe, in a sort of visual enactment of Brexiters’ dreams. Triggered by the controversial collapse of Thomas Cook, Operation Matterhorn brought UK government officials into close contact with tired, rightfully aggrieved and potentially out-of-pocket holidaymakers after the 178-year-old travel group failed to reach a last-ditch rescue deal. Calling it “Britain’s biggest ever peacetime repatriation” was a rather grand spin on this sorry affair, which saw 600,000 tourists stranded worldwide and 21,000 people lose their jobs. The slogan “don’t just book it, Thomas Cook it” will now also pass onto the great advertising graveyard in the sky, while inquiries beckon.

€709 million
Record revenues in euro scored in the year to July by Manchester United, despite what its executive chairman Ed Woodward called a “turbulent season”.

€376 million
Wage bill in euro at the football club, more than half its revenue, for the trophy-less period.

1.1 billion
Number of “fans and followers” that Manchester United has worldwide, according to a noticeably asterisked survey of 54,000 people the club commissioned from Kantar. Some 467 million of these were defined as “fans” who would - if they could all be asked - identify United as their favourite team unprompted.

Getting to know: Artie Minson and Sebastian Gunningham

The key thing about Artie Minson and Sebastian Gunningham is that they’re not Adam Neumann, the now former chief executive of the We Company, parent of office sharers WeWork. Neumann quit this week, saying the “scrutiny” of him had “become a significant distraction”. Minson, previously chief financial officer of WeWork (good luck with that) and Gunningham, previously vice-chairman, will now be co-chief executives of the company as it stumbles its way in the vague direction of an initial public offering (IPO) and tries not to trip over too much of that pesky “scrutiny”. Unlike Neumann, neither Minson nor Gunningham are reported to have secured personal loans using company stock as collateral, nor are they have said by the Wall Street Journal to have smoked weed with their friends on a private jet. Indeed, WeWork insiders told Bloomberg that Minson was a “sober choice”.

Annual retail sales for Ikea topped €40 billion for the first time in the year to the end of August as the Swedish furnishings giant advanced its plan to colonise our living spaces. But what was behind is 6.5 per cent growth in sales this time around?

2. Billy. The old reliable Billy bookcases are still doing the business, with 7 million of them wheeled out to Ikea’s car parks in the period.

3. Veggie hot dogs. Their popularity in its cafes convinced Ikea to make its veggie hot dogs available to take home from its food market. Some 10 million of them were sold.

4. New products in general. Ikea introduced more than 2,000 of them in the period, and not all of them were just the same rug in a different colour.

5. Gratulera. This was the retro line that “celebrated” the 75th anniversary of Ingvar Kamprad founding Ikea on his uncle’s kitchen table, which was sadly not for sale.