Ireland will be the ‘big loser’ if OECD tax reform fails, Saint-Amans warns 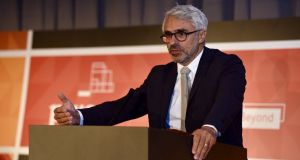 Pascal Saint-Amans, the tax director at the Organisation for Economic Co-operation and Development speaking at the Irish Times/PwC Tax Summit.

The OECD’s tax chief has questioned whether the Republic’s corporation tax base is sustainable, while warning that the State would lose out if the process to reform the global tax system fails.

Pascal Saint-Amans, tax director at the Organisation for Economic Co-operation and Development (OECD), said the organisation’s so-called Beps ( base erosion and profit shifting) initiative had been very beneficial to Ireland, with corporate tax income more than doubling to €10 billion in the past five years.

“We know that Beps has been extremely positive to Ireland, but is it sustainable?,” he asked at the PwC/Irish Times tax summit in Dublin.

He said it is probably better to organise a distribution of taxing rights that everybody’s happy with “rather than sticking to a big pot of money with many countries saying it’s unfair”.

Despite warnings that reform of the current system could wipe out 50 per cent of the State’s current corporation tax base, Mr Saint-Amans insisted Ireland had little to worry about.

“There is stuff happening in Ireland and that’s why the onshoring of assets here [in the wake of the OECD’s initiative] is no surprise,” Mr Saint-Amans said.

He said he told former finance minister Michael Noonan at the outset, that Ireland would benefit from the process, but admitted to be surprised by magnitude of the increase, specifically the 26 per cent jump in gross domestic product (GDP) here in 2015.

“So it’s no longer the case of the ‘double Irish’ and other structures, where you have a nominal rate of 12.5 per cent but you undermine it by having an effective rate much below that,” he said.

The longstanding loophole in Irish tax law, which allowed companies shift profits offshore by incorporating here while remaining tax resident elsewhere, was abolished for new companies arriving here by Mr Noonan in 2015, but the relief was extended until 2021 for companies already using it.

Mr Saint-Amans was, however, critical of the length of time the State is taking to phase out the structure.

While the Irish Government had made important changes to its corporation tax code, it had been slow to get rid of the “double Irish” arrangement, presumably to extend certainty to business, but this had been perceived negatively by other countries, he said.

Nonetheless Mr Saint-Amans said Ireland had engaged positively with the OECD’s project to reform the system, “which was not a given”.

He said a global deal on tax “cannot entail big losers and big winners” but must strike a balance.

“So what’s the price for tax certainty and market jurisdiction, reallocation of tax rights? How far can you go without exporting countries like Ireland losing too much?”

“And that’s the discussion which is taking place,” he said. However, he warned that if the reform agenda failed we would have “chaos” with unilateral action from individual countries and Ireland could end up being “a big loser on tax” in that system.

Mr Saint-Amans acknowledged that the State’s appeal of the EU’s €13 billion Apple tax ruling was likely to put the spotlight back on Ireland in terms of tax. However, he declined to comment on the case itself.

He said the Beps process was like playing chess with 134 countries while noting that multinational tax avoidance was fuelling anti-establishment populism across the globe.

In response, France recently passed legislation for a 3 per cent tax on the revenues that companies earn from providing digital services to French users.

While Ireland has seen a strengthening of foreign investment during the first phase of the OECD changes, the second phase – due to be phased in after 2020 – is likely to pose a greater challange.