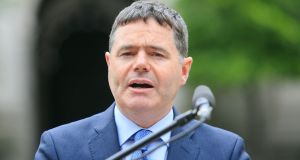 Minister for Finance Paschal Donohoe said the figures are a timely snapshot of State finances ahead of Budget 2021 later this month. Photograph: Gareth Chaney/Collins

Government spending to combat the Covid-19 crisis left the State more than €9 billion in the red at the end of September, the latest figures show.

The exchequer had a deficit of €9.37 billion at the end of September against a surplus of €38 million at the same time last year, according to Government returns published on Friday.

“The rise in expenditure primarily reflects increased departmental drawdown in response to the Covid-19 pandemic, particularly in relation to the Department of Health and the Department of Employment Affairs and Social Protection,” said a statement.

Payments to workers who lost their jobs or suffered severe cuts to their incomes are likely to push social protection spending past €30 billion this year, the Government predicted.

The Government noted that resilient corporation and income tax, along with a strong performance at the start of the year, helped make up for a fall in most other revenues.

A €2 billion dividend from the National Asset Management Agency boosted non-tax income by €1.1 billion to €5.58 billion. This brought total State revenues to €55.43 billion for the year to date.

Workers and businesses paid €5.32 billion in taxes to the State in September, €411 million or 7.2 per cent less than during the same month last year.

“Many of those that lost their jobs over recent months were outside the income tax net,” the Government said, indicating that Covid-19 hit lower paid workers hardest.

Its statement noted that the better than expected performance of income tax was down to this fact and the “progressive” nature of the Republic’s system, where those who earn more pay more. Income tax take fell 7.7 per cent in September alone to €1.54 billion.

Corporation tax, levied on companies’ profits, rose 28 per cent to €7.47 billion in the first nine months of this year from €5.84 billion over the comparable period in 2019. In September, companies paid €991 million, €81 million more than during the same month last year.

Paschal Donohoe, Minister for Finance, called the figures a timely snapshot of State finances ahead of Budget 2021 later this month.

“They show that, although receipts are better than previously expected, much of the overperformance relates to corporation taxes – a revenue stream we cannot rely on over the medium-term,” he warned.

Michael McGrath, Minister for Public Expenditure and Reform, said the €10.5 billion increase in spending on last year highlighted the measures taken to combat the pandemic’s impact. “Social Protection spend is now projected to be more than €30 billion this year,” he said.

“This response from Government reflects the scale of the impact that the pandemic has had on people’s jobs and incomes.”

Covid-19 prompted shoppers to rein in spending, sending value added tax (VAT) tumbling by 20 per cent in the first nine months of the year to €9.87 billion from €12.3 billion during the same period in 2019.

Excise, levied on alcohol, tobacco and fuel, fell despite signs that travel restrictions, which forced Irish people to holiday in the Republic, boosted the sale of these products over the summer.