Central Bank is pondering whether to bolster economic recovery stimulus 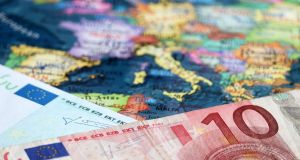 ECB president Christine Lagarde has flagged that prices in the region will decline in coming months.

Consumer prices in the 19-nation euro area fell more than economists forecast in September, keeping up pressure on the European Central Bank as it debates whether to add stimulus to support the recovery from the coronavirus recession.

The inflation rate came in at -0.3 per cent, slightly below the median estimate in a Bloomberg survey. Prices for services were a particular drag in September, with some food and energy also cheaper than during the previous month. Core inflation fell to a record-low 0.2 per cent.

While weak inflation can in part be explained by technical reasons, such as a temporary sales-tax cut in Germany, it also highlights the risks of subdued demand and an appreciation of the euro, which damps import costs.

ECB president Christine Lagarde has flagged that prices in the region will decline in coming months, but said they should turn up again in early 2021. Earlier this week, she said the anchoring of longer-term market-based inflation expectations might have “softened,” in what might be a signal that more monetary stimulus is in the pipeline.

The ECB sees inflation averaging just 1.3 per cent in 2022, far below its goal of just under 2 per cent. It’s currently looking into adjusting this target as part of its strategic review.

Some policy makers have started to prepare the ground for providing more support. Executive Board member Fabio Panetta argues that the risk of delivering too much stimulus is smaller than being “too shy,” and Bank of Spain Governor Pablo Hernandez de Cos has said weak price pressures show there is “no room for complacency.”

ECB vice president Luis de Guindos this week downplayed the prospect for imminent action however, saying there’s no need to take a decision immediately. If necessary, the central bank’s €1.35 trillion emergency bond-purchase programme could be recalibrated in the future, he said.

Economists predict the program will be increased by 350 billion euros this year – most likely in December when new economic projections are announced.

Other recent data have been mixed.

While virus infections are picking up and raising the threat of new restrictions, manufacturing in the euro zone is expanding at the fastest pace in more than two years. – Bloomberg