Paddle-in cinemas, Comcast’s new investor and the Republic of Kent

Planet Business: Constructive discussions all round 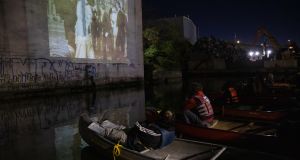 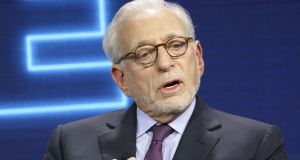 Nelson Peltz, chief executive and a founding partner of activist investment firm Trian Fund Management, which has bought a 0.4 per cent stake in Comcast. Photograph:

Image of the week: Waterworld

Drive-in cinemas are a last century business, cycle-in cinemas are much more 2020, but for those seeking true edge, welcome to the world of the (free) “paddle-in” movie. At the risk of giving anyone in the Dublin area a cunning plan, this is what they do in Brooklyn, New York.

Even before coronavirus came along to boost the appeal of outdoor entertainment, an organisation called the Gowanus Dredgers Canoe Club has been projecting classic movies onto a graffiti-adorned industrial wall for the delectation of film fans who avail of the club’s flat-bottomed canoes, with some basic paddling instruction thrown in for good measure.

Attendees are welcome to bring their own snacks and non-alcoholic drinks, but if they forget this vital part of their night out, not to worry, during the old-school intermission their canoe may be visited by a “snack barge”.

7,000 Haulage trucks that could wind up queuing through the car park of Kent, southeast England, when the UK leaves the single market on January 1st, 2021, according to Brexit enthusiast Michael Gove, aka the Chancellor of the Duchy of Lancaster.

2 Under a “reasonable worst-case scenario”, and not what was previously dismissed as “Project Fear”, hauliers can expect to be delayed for two days travelling from the UK to the continent via ferry or the Eurotunnel, and vice versa.

70% Up to this percentage of freight trucks travelling to the EU may be unprepared for the imminent new border controls, Gove suggested with a straight face. A “Kent Access Permit” is now set to add to their paperwork.

Getting to know: Nelson Peltz

New Yorker Nelson Peltz is the billionaire father of actor Nicola Peltz, the fiancée of former celebrity baby Brooklyn Beckham (21), a fact not strictly relevant to why he’s in the news this week. Peltz is chief executive and a founding partner of activist investment firm Trian Fund Management, which has bought a 0.4 per cent stake in Comcast, the US owner of European pay-TV company Sky.

Described by Bloomberg as “one of the world’s most dogged investors”, he is said to have set his sights on Comcast with the intention of repeating its usual strategy of pushing corporations to offload their poor-performing businesses, then cashing in from a rising share price.

Trian says it “believes Comcast’s stock is undervalued” and has begun “constructive discussions with Comcast’s management team”, although whether Comcast feels the same way is debatable. Like Sky’s previous part-owner Rupert Murdoch, the young Beckham’s future father-in-law is a loyal Donald Trump supporter.

In an effort to avoid using the “C” word, let’s just say many vendors of toys found beneath trees sometime around December 25th have got their pre-season hype under way by releasing lists of this year’s must-haves. So which ones are making the cut?

1. L.O.L. Surprise! The doll range phenomenon, made by MGA Entertainment, will be along again this year to provide some continuity in a world gone mad.

3. Xbox Series X. The new Microsoft games console isn’t due for release until November, although some over-excited and confused people this week sent the similarly named (but not new) Xbox One X shooting up Amazon’s sales rankings.

4. Micro scooters. Department store chain John Lewis is tipping a scooter made from recycled materials, so children can terrify adults and be eco-friendly at the same time.

5. Design-a-Friend Sienna Doll. Argos’s top pick seems perfect for a Covid-19 era in which your real friends have tragically been assigned to another pod.