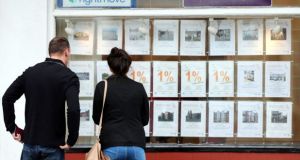 Decrease in headline arrears has been driven by payment breaks.

The number of residential mortgages in arrears fell in the second quarter despite the impact of Covid-19.

Figures from the Central Bank of Ireland show the number of owner-occupier mortgage accounts in arrears for less than 90 days decreased by 6,645 during the quarter.

Lenders here began offering customers specific Covid-19 repayment holidays in March as restrictions to curb the spread of the virus resulted in hundreds of thousands of workers being temporarily laid off.

Just more than 90,000 account holders availed of Covid-19 payment breaks, representing about 10 per cent of loans to Irish borrowers. Close to half of those have since returned to making full payments. This has helped limit the potential level of arrears.

The latest data show that at the end of June this year, there were 736,307 private residential mortgage accounts for principal dwellings held in Ireland, with a value of €98 billion.

Of this, 56,792 accounts were in arrears, representing a decline of 10 per cent over the quarter.

The rate of mortgages in arrears for more than 90 days remained unchanged at 5.6 per cent.

Accounts in long-term arrears – those behind in their repayments by more than 720 days– decreased marginally to 26,228 and now account for 46 per cent of all owner-occupier accounts in arrears.

Banks, under pressure from regulators, are assessing which of the loans subject to payment breaks will not be able to return to regular payments while working on restructuring and forbearance solutions for these borrowers.

For the majority (61 per cent) of owner-occupier accounts in arrears “no formal demand” has been issued, while 9,297 (16 per cent) are part of the legal process, which includes cases at Civil Bill lodgement stage, or where the case is still in the courts system.

A separate Central Bank study on long-term mortgage arrears, published by the Central Bank, revealed that a significant number are more than 10 years in arrears, with such cases dating back to the last financial crisis.

While mortgage arrears have fallen in recent years as lenders sought better solutions and the economy picked up, a bigger concentration of those that remain are “increasingly concentrated in the longer term arrears cohort”.

It also found that one-third of those in long-term arrears were making no mortgage repayment while almost half had limited or no engagement with their lender.