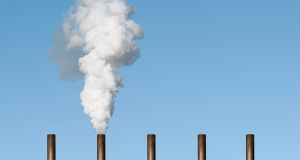 Reducing transport emissions may be complicated by Brexit. A lot of “dirty” cars bought in the Republic come second-hand from the UK.

September saw big developments in climate policy: China committed to eliminate their greenhouse gas emissions by 2060 and the EU Commission published its proposals to drive carbon reduction across the EU. A stronger EU policy will reinforce the efforts planned for Ireland under the Climate Action Plan and the programme for government.

Accelerated action is needed. Irish greenhouse gas emissions for 2018 show no change compared to 2017. Although there was significant progress in the electricity sector, it was offset by increased emissions elsewhere. As Wednesday’s Climate Change Advisory Council’s report advised, if climate plans are to become reality, the Government needs to take measures that will be effective in delivering changes in behaviour by firms and individuals.

We won’t get the scale of change required by simply exhorting people to do the right thing – climate-friendly choices need to be the ones that make most economic sense for individuals, for businesses and for farmers. That means that the price of carbon needs to reflect the total environmental cost of the carbon emissions involved. That will encourage businesses to invest in low-carbon technologies, and will incentivise households to switch to those technologies for transport and for heating our homes. International experts agree this is a core part of transition to a carbon-neutral world.

That is why the Climate Change Advisory Council has recommended a steady increase in carbon tax each year over the coming decade, as now provided for in the programme for government, and that, to protect those on low incomes, revenue should be used to insulate their living standards.

The EU proposals for policy reform will be helpful, if implemented. They would ultimately result in a common price for carbon emissions across the EU, avoiding damaging competition via lower carbon pricing. EU-wide pressure on the car industry to switch from fossil fuels will facilitate Ireland’s aim to decarbonise transport. If the EU forces faster change in the car industry, this should bring a welcome fall in the price of electric cars.

Ireland’s Climate Action Plan called for the replacement of nearly a million fossil-fuel powered cars with electric vehicles by 2030. The council’s research suggests this is a very challenging target. Mass subsidisation would not be sustainable for the exchequer, and we may need a tax stick, not a subsidy carrot, to make the switch. Because those driving longer distances will save more emissions and costs with electric vehicles, the council recommends that priority be given to rolling out electric vehicles among such users, including those in rural areas.

Reducing transport emissions may be complicated by Brexit. Currently a lot of cars bought in the Republic come second-hand from the UK. A continuing inflow of “dirty” cars from the UK over the coming decade could partly offset the benefits of domestic policy.

We also need to change how we power goods-transport by road, which accounts for about 40 per cent of all road-transport emissions. Green hydrogen may be more suited than electricity to power future heavy goods vehicles.

Minimising long commutes will also save on transport emissions. Where we build the almost one million new homes we will need in the next 30 years will be crucial. Denser development in our cities, combined with investment in urban public transport, can be a win-win, with lower congestion and lower emissions than commuter-belt sprawl. BusConnects is a vital first step in better public transport.

Reducing emissions from home heating will require a major programme of retrofitting homes. While this will save households money in the long run, there are significant upfront costs involved. The priorities for any State assistance should be first retrofitting the social housing stock, and second helping those households who rely on oil or solid fuel to install heat pumps. We will achieve a bigger emissions reduction by focusing first on replacing oil boilers, many of them in rural homes, than by replacing gas boilers. The design of retrofits must have our future climate in mind, including considering new risks like overheating.

While the programme for government makes important commitments on reducing our greenhouse gas emissions, it is less specific on what we need to do to adapt Irish society to the change in climate, which is now inevitable. For example, even if global warming is halted by 2050, the sea level will continue to rise into the next century and our cities will be at increasing risk of flooding. The necessary investment needs to be planned now to future-proof against the change that is coming.

John FitzGerald is chair of the Climate Change Advisory Council