Public-sector unions are demanding it. The Government says it can’t afford it. What happens next has implications for taxes, public spending, recruitment and pensions 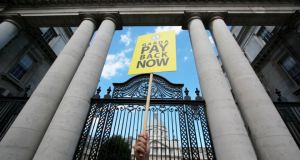 Public servants had heavy pay cuts during the financial crisis – generally 10-12 per cent including the pension levy, and rising to 20 per cent for the highest paid. Public-sector numbers were also cut as part of a programme that reduced the yearly pay bill from €17 billion to €14 billion.

Restoration is now under way. Figures from the Department of Public Expenditure and Reform show that the average cost to the exchequer of paying a public servant fell from just over €60,200 in 2008 to €52,360 by 2014. The figure has since recovered to €54,857.

With large numbers of senior public servants leaving, particularly in 2009 and 2012, and new hires at lower average levels, the figures are not a direct measure of the trends for individuals. But they do show the trend.

And the move to restoration is set to continue. Public servants are receiving increases averaging €2,000 a year under the Lansdowne Road deal, which is due to run until 2018, as well as the return of an annual increments for many.

Now, however, the arguments about whether public servants “deserve” quicker pay restoration is being conducted in something of a vacuum. The Government is establishing a Public Pay Commission to advise it on a future strategy. It will benchmark public pay against both the Irish private sector and similar jobs abroad.

Until this work is completed, next Easter, the debate will continue. The public-sector unions will beat the drum of restoration. The Government will plead that it can’t afford it. But there are consequences to faster pay restoration, among them . . .

The money would have to be found
No money is provided next year for faster pay restoration, beyond the terms of Lansdowne Road. The €40 million-plus cost of the deal with gardaí will be found by tweaking elsewhere, but a wider deal would cost a multiple of that. This would involve borrowing more, raising additional taxes elsewhere, or cutting spending in other areas.

Given some slowdown in economic growth, it is unlikely that 2017 tax revenues will come in far enough ahead of target to pay for significantly higher public pay. And, anyway, Ireland is obliged to stick within European Union budget rules, which dictate how fast spending can increase.

Public-sector recruitment might have to slow
One of the likely trade-offs to higher pay would be slower recruitment of new public servants. Numbers have increased from a trough of just over 288,000, in 2013, to 312,800 last year. By 2018 the public pay bill will be close to where it was before the crisis.

The future mechanism to set public pay would be in question
The Government wants to put in place a mechanism using the new Public Pay Commission. But this strategy could be in tatters if it does a deal beforehand. The trade unions say they want a collective approach to setting pay for the public service, but it is not clear on what basis they want this to happen for the future.

The pension issue will not be resolved
As well as the future mechanism for setting public pay, the Government wants to include the issue of public-sector pensions in the work of the new body. Private pensions have been hard hit during the crisis. Public servants’ highly advantageous defined-benefit pensions, which guarantee a particular income on retirement, are now the key disparity with the private sector.

There is a strong argument, for example, to retain the pension levy to help pay the future cost of these pensions, but a key part of the unions’ agenda is continuing to phase it out. And a large part of the pay restoration under Lansdowne Road has come from a reduction of the levy.