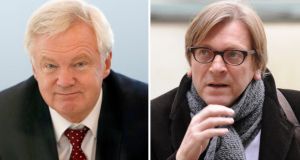 Senior figures in the European Parliament warned Britain on Tuesday that it cannot “cherry pick” from members of the European Union, after Brexit minister David Davis met senior EU negotiators for talks on Britain’s forthcoming exit from the bloc.

Mr Davis paid a surprise visit to the EU institutional capitals of Brussels and Strasbourg this week, meeting among others the European Commission’s chief Brexit negotiator, Michel Barnier.

But speaking following his meeting with Mr Davis on Tuesday in Strasbourg, the parliament’s main negotiator, Guy Verhofstadt, said that the four freedoms, enshrined in the EU treaties, could not be sacrificed in the negotiations.

“It is impossible to find a solution that would destroy the so-called four freedoms,” Mr Verhofstadt said. “These four freedoms are key; they are a basic element of the European Union – the freedom of movement of goods, services, capital and of people. We will certainly never accept whatever development where these four freedoms are put at risk.”

Senior figures in the British government have said they favour retaining access to the single market – a message delivered by prime minister Theresa May earlier this week to business leaders – but they also want to regain control over immigration from the EU into the United Kingdom.

A UK government spokesman described the first meeting between Mr Davis and Mr Verhofstadt as “constructive”, adding that Mr Davis had assured Mr Verhofstadt that Britain was approaching the negotiations in a spirit of goodwill.

But in a sign of the tough battle ahead for Britain, Manfred Weber, the chairman of the centre-right European People’s Party (EPP) and an ally of German chancellor Angela Merkel, said Britain could not “cherry pick” a deal with the EU.

“I must stress again: Brexit means Brexit, that means leaving the European Union, that means cutting off relations . . . and not cherry picking, not special relationships,” he said following his meeting with Mr Davis, adding that he had received no new ideas about what Brexit really means.

The European Union has refused to engage in formal negotiations with Britain on the country’s exit from the bloc until London activates article 50 of the Lisbon Treaty, the official exit mechanism for leaving the EU, though senior figures agreed to meet Mr Davis this week at London’s request.

Ms May will also attend a scheduled summit of EU leaders next month in Brussels. Mr Davis met Mr Barnier, the head of the commission’s Brexit taskforce which will be leading the technical discussions on the method of departure on Monday in Brussels.

The former French commissioner tweeted that the meeting was a “courtesy visit”, initiated at Mr Davis’s request, adding “no negotiation without notification. My work is now focused on EU27.”

Meanwhile, speaking in London at the annual conference of the Airport Operators’ Association, Ryanair chief executive Michael O’Leary said the British government appeared to have no idea where it was going with Brexit.

“Frankly there’s very little evidence apart from some mildly lunatic optimism over here that it will be all right on the night,” he said.

“These guys have no idea where they’re going for the next two years and the problem is that, in the absence of any discussions with the Europeans on Brexit, they’re all talking to themselves. They stand up in the Houses of Parliament [and say] ‘We’re going to do a good deal for Britain’. Any idea what a good deal looks like? No, they haven’t a clue.”