Exports to UK at risk of 30% drop without trade deal 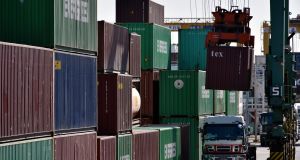 Almost 14 per cent of total Irish exports go to the UK and this trade would be cut by almost one third.

Ireland’s exports to the UK could drop by more than 30 per cent, creating major economic disruption, if the UK leaves the EU without agreeing a special trade deal, according to new research from the Economic and Social Research Institute (ESRI). The institute identifies the risk of a major fall in trade between Britain and other EU countries in some sectors, including areas of the food industry, which would be a particular threat to Ireland. Overall, it says, total Irish exports could drop by more than 4 per cent, representing an annual loss of €4.5 billion in cash terms.

The research is based on what might happen after the UK leaves the EU, but before any new trade deal is done between the two sides. It is the first to examine the possible impact, sector by sector.

In this scenario, ESRI researchers Martina Lawless and Edgar Morgenroth, in a new working paper, assume tariff rules set down by the World Trade Organisation would be applied on trade between the the UK and other EU countries.

This would mean that tariffs – special taxes on imports – would apply on goods traded between the UK and the EU. On the basis of arrangements currently in place between the EU and non-EU countries, these would vary hugely, but could run to 50 per cent or more in some sectors, particularly in areas of the food sector and clothing.

As this would push up prices to consumers, trade could be hit hard in some areas as products become unaffordable. In some cases, companies could adjust their products to lower the impact

Ireland is particularly exposed, because of our high level of trade with the UK and because much of it is in agricultural products to which high tariff levels apply. Almost 14 per cent of total Irish exports go to the UK and this trade would be cut by almost one third. The research also estimates that there would be a 28 per cent drop in UK imports into the Republic, many of which would increase sharply in price.

Overall, the study shows the huge disruption to trade which would result, unless the UK and the EU can strike some kind of interim trade deal after Britain leaves the EU and before a full agreement is hammered out, which could take years. It is possible that they will agree a less harmful deal which would apply after the UK leaves. However, the researchers also warn that if Britain leaves the customs union, then even greater complications and barriers to trade could apply.