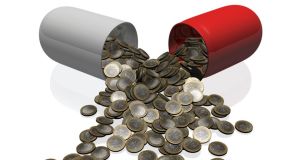 The sectors most exposed to Brexit are pharmachem, food and beverage, traditional manufacturing, materials manufacturing and electrical equipment, according to the Department of Finance analysis. Photograph: Getty Images/iStockphoto

The five sectors in Ireland most exposed to Brexit and the fall in sterling employ 94,000 people, according to a special analysis undertaken by the Department of Finance.

Apart from the pharmachem sector, the bulk of the companies involved are low profit and largely based outside Dublin, while many are SMEs.

The most exposed sectors were pharmachem, food and beverage, traditional manufacturing, materials manufacturing and electrical equipment. According to the department’s analysis, they “have a comparatively large share of employment based outside of Dublin,” with almost 80 per cent of jobs in the food and drinks sector in the regions.

“The highest share of total employment in the exposed sectors . . . is found in the Border region,” it found. Companies in this sector typically rely on UK sales for a hefty 9 to 13 per cent of total turnover.

Annual exports in goods and services with the UK amount to about €34 billion, or 17 per cent of Irish exports, the document said. The UK thus remains the biggest single market for Irish exporters, even though reliance on it has fallen from the early 1970s, when the UK accounted for more than 50 per cent of exports.

However, Minister for Finance Michael Noonan said in his budget speech that up to 40 per cent of all exports by indigenous companies go to the UK market.

“Over €1.2 billion of goods and services are exchanged between us on a weekly basis,” Mr Noonan said on budget day. “This trade supports 400,000 jobs, split evenly between the two islands, with many more in the supply chain.”

In the service sector, the UK accounts for a significant share of overseas sales in computer services and insurance/financial services. Another key exposed sector is tourism, where about 40 per cent of trips to Ireland are undertaken by UK residents.

The UK is important to Ireland as a source of imports, with almost 30 per cent of merchandise imports and 17 per cent of all imports originating from the UK. The UK is also a major source of so-called “intermediate” goods – which are used by Irish companies in the production process for exports. In some cases this will protect Irish companies, as they will be able to buy these inputs more cheaply in sterling terms.

But it also points to the potential complications caused by the disruption to complex supply chains typical in modern businesses. It is unclear what tariffs might apply on imports from the UK in future, but some are possible in the event of a “hard” Brexit.

These could increase costs for those importing from the UK and add another barrier to those selling into the UK market.

How well are the companies involved able to withstand pressure on their margins? With access to Revenue Commissioners data, the department was able to estimate that “the mainly indigenous exposed sectors in manufacturing show relatively low levels of profit as does the services sector of tourism”.

Profits are dominated by the pharmachem sector on the goods side and the financial sector in terms of service exporters, both of whom will have more room for manoeuvre financially.

There was no vaccine for Anglo: Why the last crisis was different