Lidl and Aldi to hold prices in Republic despite sterling slide 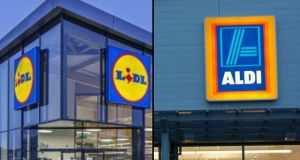 On Wednesday the two supermarket chains raised the price of staples in the UK. Photographs: The Irish Times

Shoppers in the Republic will not be affected by the decision of Aldi and Lidl to raise the price of basic groceries in the UK due to the post-Brexit sterling collapse.

On Wednesday the two supermarket chains raised the price of staples including milk and bananas across their UK outlets by between 4 and 6 per cent with a four-pint container of milk in both in the UK going up to 99p €1.17 from 95p (€1.12).

A two litre container of milk in Aldi and Lidl outlets in the Republic retails for €1.49 while 1kg of loose bananas in Lidl costs €1.25.

When asked to explain the price difference in milk, an Aldi spokesman would only say that all the milk sold in the Republic was sourced locally and the store could “absolutely guarantee that our customers will always pay the lowest grocery prices in Ireland when they shop at Aldi”.

A spokeswoman for Lidl, meanwhile, said its priority was to source “top quality Irish milk, at the best price for our 147 stores from Irish suppliers” and she said its price for bananas had not changed in two years.