‘Excessive debt is an enemy of the people,’ says economic affairs commissioner 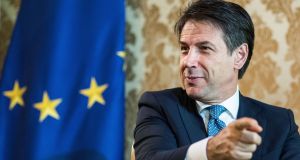 The European Commission has given Italy’s populist government three weeks to redraft its 2019 budget or face European sanctions.

The move, likely to prove politically explosive in Italy, represents the first time the commission has ever requested of a member state the presentation of a revised draft budgetary plan. It was a widely expected response to the Italian coalition’s determination to break with agreed EU budget deficit targets.

It “represents a clear and intentional deviation from the commitments made by Italy last July,” economic affairs commissioner Pierre Moscovici told journalists in Strasbourg.

He said that the commission was not attacking Italy but acting to defend the Italian people: “Excessive debt is an enemy of the people.”

Italy had submitted a letter to the commission on Monday defending the rationale of its budget, arguing that its proposed excessive deficit could be sustained by the additional growth it expected to generate.

Rejecting that reasoning, vice-president of the commission for the euro and social dialogue Valdis Dombrovskis said that “breaking rules can appear tempting, it can appear like breaking free. But at some point the debt weight is too heavy and you have no freedom at all.”

He argued that expanding debt would simply add to the burden of repayments on ordinary Italians, last year the equivalent of the whole Italian education budget.

At its meeting on Tuesday the commission “identified a particularly serious non-compliance with the fiscal recommendation addressed to Italy by the council.”

Mr Moscovici said that this was “not a borderline case. The ball is not on the line, but well over”, and he insisted that this was not a political move but driven by the commission’s obligation to uphold EU budgetary rules.

At issue primarily is the so-called structural deficit. Italy projects this will deteriorate 0.8 per cent while the commission has insisted on an improvement of 0.6 per cent.

The commission said on Monday it had refrained earlier in the year from citing Italy as in breach of the union’s excessive deficit procedure but the draft budget was so out of line as to require a reassessment of that decision.

Where the commission finds that a country persistently breaks deficit rules, it could eventually open the excessive deficit procedure. Under that process, a country could be fined up to 0.2 per cent of output.

Italian per-capita public debt is now running at some €37,000, with interest payments on it alone costing €1,000 per person every year. The populist government of Liga and the Five Star Movement says it is determined to break out of what it sees as the Brussels austerity paradigm and spend its way out of debt.

Mr Moscovici told journalists, however, that the “commission is not a brake on Italy, but an engine of Italian growth”. It had allowed Italy some €30 billion of fiscal flexibility in the past three years, supported €8.5 billion in investment and €45 billion in structural funding, he said.

Mr Dombrovskis said the “commission is not engaged in party politics in the member states. Its decisions are based on facts and the draft budget submitted by Italy.”