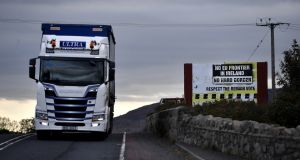 Seamus Leheny of the Freight Transport Association said there could be 4,000 commercial vehicles stopped at the Border every day for documentary ID checks, with up to 50 per cent of these then subjected to physical inspections. Without a Brexit deal this could lead to “paralysis” at the Border. Photograph: Getty Images

Businesses in the North would opt for a backstop arrangement over a no-deal UK exit from the EU “any day”, Northern Ireland businesses leaders have told House of Commons MPs in London.

According to Stephen Kelly, chief executive of the campaign group Manufacturing NI, businesses believe they “can make the backstop work” and it could also create new opportunities for Northern Ireland firms. But he warned that the current lack of direction from the British government on Brexit to businesses in the North is a source of frustration and concern.

Mr Kelly was one of four Northern Ireland business leaders who gave evidence to the House of Commons’ Exiting the European Union Committee on Wednesday in London.

He told MPs that businesses in the North were not interested in the politics surrounding the British EU exit but were interested in the “practicalities” and that what the North’s business community needs most at this time is “clarity” on the way forward.

‘Our businesses get a broken nose’

“But in every one of those scenarios, our businesses get a broken nose. At the end of the day, the only thing that matters to us is that our businesses have the ability to trade legitimately and fairly across all marketplaces.”

He told the committee, which includes hardline Brexiteer Jacob Rees-Mogg and the DUP’s Sammy Wilson, that one in every four families in the North depend on a manufacturing wage and as a result they are now facing a very uncertain future.

“The vast bulk of people are sitting with their head in their hands . . . the overall reaction is worry and concern,” he said.

Mr Kelly said any change to the current trading arrangements with Europe would add cost and complexities for manufacturing firms in the North, which would in turn reduce their competitiveness. “All of those scenarios have damaging consequences for our firms – there will be casualties,” he warned.

Some Northern Ireland manufacturers were already moving investment outside of the North and told the committee that one of Manufacturing NI’s members had purchased a site in Co Mayo for £500,000 while another member had bought five acres of land in Donegal, Mr Kelly said.

Mr Kelly also disclosed that one of the North’s “most important manufacturers” had made “two purchases” in the Republic and also acquired a dispatch facility in the South as part of their Brexit plans.

All four business leaders painted a grim picture of what life could be like in the North for their members post Brexit if a deal was not secured or at the very least agreement on a backstop arrangement.

Mr Billington said the North’s food and drink industry had already lost 24,000 employees since the Brexit vote and throughout the sector was “a strong fear of the consequences of leaving Europe without a deal”.

He said that without a deal or a transition arrangement in place there were question marks over the future viability of certain sectors particularly dairy and sheep.

Meanwhile Mr Connolly told the MPs that Brexit could create a “perfect storm” for Northern Ireland shoppers who already have half the discretionary income of most households in the UK.

While Mr Leheny said without an exit deal or a backstop arrangement the world could be a very different place for people in the North day one after Brexit. He said 4.6 million commercial vehicles cross the Border every year and one third of that traffic is agrifoods related.

Mr Leheny said without any agreement in place there could potentially be 4,000 commercial vehicles stopped at the Border every day simply for documentary ID checks with up to 50 per cent of these then subjected to physical inspections. He said that without a Brexit deal this could lead to “paralysis” at the Border.