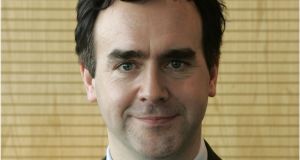 Ivan Coulter: “This is a company with fantastic potential.” Photograph: Dara Mac Dónaill

Ivan Coulter, the founder and former boss of Sigmoid Pharma, has been appointed chief executive of a new UCD spinout drug company that is tackling a deadly heart condition.

Atxa Therapeutics has identified a range of molecules that could tackle a number of conditions. Its first target is pulmonary arterial hypertension (PAH), a rare, progressive disorder in which the muscles in the walls of the arteries in the lungs become thickened and make it harder for the heart to pump blood through the lungs.

The condition, which affects as many as 500,000 people worldwide, often leads to severe breathing difficulties and heart failure.

Untreated, patients survive, on average for no more than three years. Even when treated at an annual cost of $6 billion (€5.3 billion), current medications can extend that average by just two years.

Atxa is one of a number of companies chasing new therapeutic approaches to PAH. Others include Actelion, the Swiss group that was acquired by Johnson & Johnson for $30 billion last year.

Dr Coulter says Atxa aims not only to halt progression of the disease but to reverse it.

“Other drug approaches are not looking to modify the disease,” he said. “The problem is that their focus is on relaxing the artery but they are not addressing other facets of the condition.”

The company was founded by UCD professor of biochemistry Therese Kinsella and is the culmination of 20 years of research. The company has secured orphan disease designation from both the US pharma regulator, the FDA, and its European equivalent.

It has also received €2.5 million in grant funding through the EU’s prestigious Horizon 2020 programme, one of 64 successful applicants from a field of 1,280.

Atxa is in the process of raising up to €5 million to fund the company through initial human safety studies which are expected to report results in 2020.

“This is a company with fantastic potential,” said Dr Coulter, citing its orphan status, its EU funding and strong intellectual property protection among reasons he chose to join the fledgling company at this time.