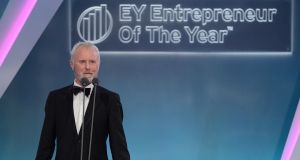 Bill Wolsey of he Beannchor Group, winner of the Industry Award at the EY Entrepreneur of the Year Awards. Photograph: Dave Meehan

Bill Wolsey, founder and managing director of the Northern Irish hospitality group Beannchor, has been named EY Industry Entrepreneur of the Year.

Mr Wolsey, who opened his first bar in Bangor more than 40 years ago, has built a group that now owns more than 40 pubs, a chain of restaurants and a number of four- and five-star hotels, including the Merchant Hotel in Belfast.

Beannchor, one of Northern Ireland’s largest employers with more than 750 staff, last year recorded a 23 per cent rise in revenues to £23.7 million (€26.8 million) following the opening of the Bullitt hotel in Belfast, the first of a new brand that is also expected to open on Capel Street in Dublin next year.

Mr Wolsey, a former footballer who spent a brief period at Arsenal, has won a raft of accolades for his services to business over the years, including an honorary doctorate and an OBE.

“Bill’s tenacity and attention to detail is evident in everything he does. I am delighted that his hard work and that of his staff has been recognised here,” said Jeremy Fitch, executive director of Invest Northern Ireland and one of this year’s judges.

Mr Wolsey said he hadn’t expected to win and hadn’t realised there was more than one award being handed out.

“To my shame I hadn’t checked, which was good in a way because I was totally relaxed,” he said.

Mr Wolsey added that the company was considering expanding its Little Wing restaurant chain to the Republic in the near future but as whole he said the group doesn’t make long-term plans.

“I don’t have a 5, 10, 20-year plan. We have a simple formula that if something works and it is relevant and gives people value for money then we expand that business,” he said.

The other finalists in the industry category this year were: David Maxwell of Boojum; PJ Flanagan of H&MV Engineering; Dominic Fitzpatrick of the Irish News; Vicki O’Toole of JJ O’Toole; Louise Kennedy of Louise Kennedy; Gareth Chambers of Around Noon; and Rachel Doyle of Arboretum.