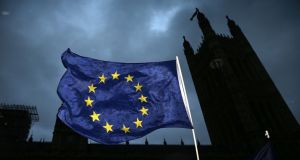 Under the IPPR’s “shared market” model, Britain could diverge from the EU — or vice versa — on matters such as goods, services, capital and state aid. The other party would then have a right to raise an objection. If no agreement were reached within six months, the diverging side would “lose a proportionate level of its preferential trading arrangement”. Photograph: Daniel LEAL-OLIVAS/AFP/Getty Images

Britain and the EU can permanently align their rules after Brexit, with a mechanism to allow some divergence in exchange for compensation, an influential think-tank has suggested.

The centre-left Institute for Public Policy Research will present its proposals to Brexit secretary David Davis on Tuesday, the same day that Prime Minister Theresa May’s cabinet discusses its desired future relationship with the EU for the first time.

UK ministers are divided over the level of alignment Britain should seek with the EU, with the foreign secretary Boris Johnson warning that the UK would become a “vassal state” if it followed the bloc’s rules indefinitely.

Under the IPPR’s “shared market” model, Britain could diverge from the EU — or vice versa — on matters such as goods, services, capital and state aid. The other party would then have a right to raise an objection. If no agreement were reached within six months, the diverging side would “lose a proportionate level of its preferential trading arrangement”.

Josh Hardie, deputy director-general of the CBI, the employers’ organisation, said the proposal “asks many of the right questions and highlights some potential solutions — a welcome contribution at an important time”.

The IPPR’s model includes a new UK court of justice, with EU and UK representatives, to adjudicate on disputes. The think-tank said there could be a “compromise” on the principle of free movement of people, arguing that the EU has already shown flexibility in its trade agreement with Ukraine, Switzerland and Liechtenstein.

Britain would also in effect remain in the customs union, thereby remaining subject to the EU’s trade deals rather than agreeing its own arrangements with third countries. The latter is a red line for many Brexiters.

Tom Kibasi, the IPPR’s director, said the proposal was for “the 70 per cent of people who want a sensible deal”, not for “the 15 per cent of extremists” on either side of the Leave/Remain divide. IPPR has historically been influential on Labour party policy.

Jeremy Corbyn’s party has gradually shifted its position on Brexit, and now maintains that Britain should not rule out being a member of the customs union permanently. While many Labour MPs and voters want a more pro-EU position, some MPs are wary of a backlash from Leave-supporting constituencies should the party be seen as moving against the result of last year’s referendum.

The initial Brexit divorce deal, agreed by the UK and the EU this month, accepts that if no other agreement is reached, the UK will remain aligned with the EU in some sectors to avoid a hard border between Northern Ireland and Ireland.

Separately, a report from the Institute for Government, published on Monday, offers a different view on how to manage regulatory divergence.

It proposes a “regulatory partnership” that would allow the UK to diverge from EU rules, at the price of losing market access if that divergence were shown to have significant impacts on the single market.

In the IoG model, the UK would remain fully aligned with the EU, and adopt new rules automatically, in certain “core” areas – and would immediately lose barrier-free market access if it diverged.

The EU would be likely to insist on UK compliance with competition and state aid rules to protect itself against regulatory dumping.

But there could also be a “mid tier” of areas where the UK could adopt its own rules to achieve the same outcomes, with an independent committee to assess “regulatory parity” and decide whether divergence had any adverse consequences.

The EU Commission would then have the right to apply penalties, with due notice. A third tier could set out areas where divergence would have no implications for market access.

All this would require strong institutions and arrangements to settle disputes.

If it effectively gave the UK similar market access to an EEA-style arrangement, the EU would be likely to insist on freedom of movement and a financial contribution as well.

The IoG argues that this model would allow the UK to make a series of choices over time about the costs and benefits of divergence, while protecting the EU against regulatory undercutting.

However, it would perpetuate uncertainty for business, which would be “continually at the mercy of decisions on divergence”.

The IOG sets out three other templates for UK-EU relations that would fall in between the so-called Norway and Canada models: a version of EEA membership that gave the UK more influence over rule making; a sectoral deal of the kind signed with Ukraine; and a bulked-up version of Canada’s free trade deal.

No option would allow the UK to win market access without the accompanying obligations on rules and oversight.

But the IoG underlines that the UK must decide what it wants, and act quickly to ensure its option is still on the table when the EU agrees its negotiating position for the next phase of talks. - Copyright The Financial Times Limited 2017.