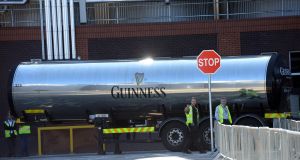 Diageo faces a double blow that will cost it tens of millions if Brexit forces border controls between the Republic and Northern Ireland and damages its ability to sell Scotch whisky in foreign markets, the company has told MPs.

Border controls would hit its supply chain and hurt many small suppliers, Diageo executive Dan Mobley told a hearing of the House of Commons’ business, energy and industrial strategy committee.

Diageo uses ingredients from both sides of the Border to make Baileys cream liqueur and Guinness.

“We are moving about 18,000 trucks a year over that Border, so even small hold-ups to process those truck movements would be really unwelcome, but the big problem would be for our suppliers,” said Mobley.

The multinational has advised the British and Irish governments about technical measures that could relieve pressures on any new controls, but retaining an open border was preferable.

“We would much rather what was agreed last week, which is for an open border,” he said. “We are heartened that all sides say that’s what they want, but we need to now see the details.”

Scotch accounts for about a quarter of Diageo’s £12 billion pound (€13.6 billion) annual turnover, while Scotch is Britain’s biggest food and drink export, worth about a fifth of the total.

He told MPs: “For us to lose the benefits of [EU] trade deals would be unwelcome, but it would be manageable. It would be tens of millions of pounds lost, rather than hundreds of millions.”

A senior Boeing executive has told MPs that the company was being used as a scapegoat for problems faced by Bombardier’s decision to cut jobs in Belfast.

Michael Arthur, chairman of Boeing Europe, told the Northern Ireland Affairs Committee that its trade dispute with Bombardier was a legal rather than a political matter.

The United States has threatened to impose a 300 per cent increase in the tariff on Bombardier’s new C-Series jet after Boeing complained that Bombardier received illegal subsidies from Canada.

“Boeing is not putting Bombardier and Northern Ireland jobs at risk nor is Boeing in the wrong and we have not received illegal subsidies,” Mr Arthur told the committee.

He said Bombardier had been cutting jobs in Belfast – where the wings for the C-Series are made – for a number of years before the dispute with Boeing.

“Boeing is being used as a scapegoat for that reduction in Northern Ireland jobs, which we all regret but which in a way predates the issues,” he said.

Boeing made its complaint after Delta Airlines placed an order with Bombardier for the C-Series, a decision Mr Arthur described as a purely commercial decision.

DUP MP Ian Paisley accused Boeing of acting spitefully, pointing out that the firm has a big backlog in orders for its aircraft and suggesting that Bombardier’s C-Series does not compete with Boeing’s aircraft.

“It is spiteful, not commercial,” Mr Paisley said.

The unionist MP asked Mr Arthur, a former British ambassador to Germany, if he was embarrassed by the awkwardness the dispute had created in the relationship between Britain and the United States. Mr Paisley said that the dispute had been a public relations disaster for Boeing, which was perceived as “crushing the wee guy”.

Mr Arthur said it was a mistake to view the dispute as a political one because his company had simply taken legal action on the basis of its commercial interest.

“From Boeing’s perspective, Bombardier has sold aircraft in the US at absurdly low prices, below the cost of production and below the price in other markets,” he said. “It is a textbook case of dumping. It was done to seek a flagship sale in the US to boost sales of an aircraft to which the market has not warmed.”