Another failed WTO meeting proves the posturing has to stop 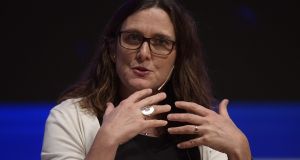 It took close to eight years to create the World Trade Organisation. The global policeman on world trade has never been one for speedy progress. But, even by WTO standards, the ministerial meeting that concluded this week in Buenos Aires was depressingly ineffectual.

As is the way with these things, ministers were never expected to agree on major trade reforms. That would have required careful choreography and clear signalling ahead of the event. But even relatively minor proposals on e-commerce and fishing subsidy curbs were scuppered.

“We have not achieved any multilateral outcomes,” European Union trade commissioner Cecilia Malmstrom told a news conference as the event concluded. “The sad reality is that we did not even agree to stop subsidising illegal fishing.”

The director general of the trade body, Roberto Azevedo, had the unenviable task of summing up the results of the three-day conference. There were simply none. The frustration of the Brazilian diplomat was palpable.

He said WTO members needed to do some “real soul-searching” about the way forward, and realise they could not get everything they wanted. “Progress was going to require a leap in members’ positions. We didn’t see that.”

The organisation’s greatest strength – the 164 member countries that have signed up to the trade body’s rules – is also one of its greatest challenges. All agreements have to unanimous. At the best of times this requires endless negotiation and diplomacy. In an era of economic nationalism, the goodwill necessary for that simply doesn’t exist.

Malmstrom accepted the US – which opened the meeting with a sharp attack on the organisation – was partly to blame for the policy paralysis in Buenos Aires, but she accused other countries of holding up progress through “procedural excuses and vetoes” as well as “cynical hostage-taking”.

That didn’t stop the EU, and 68 others, joining the US to try to frame rules for electronic commerce.

If they are to have global force at some stage the posturing on the WTO stage has to stop. Global trade deals work only if everyone stands to gain; the alternative is protectionism and we’ve seen enough of that to know it works for no one .