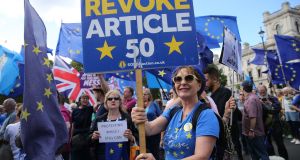 DBRS says a severe hard Brexit could lead to the break-up of the UK. Photograph: Getty Images

Sectarian violence could return to Ireland in the event of a “severe” hard Brexit, credit ratings agency DBRS said on Wednesday.

The Canadian company said increasing security and political risks “would be expected to cause significant disruption” in such a scenario.

A severe hard Brexit would involve a “deep and prolonged period of disruption and serious fallout with the EU”, according to the agency. Another no-deal scenario envisaged by DBRS would include an immediate agreement on key transition terms.

“This outcome could deliver Brexit and re-orient the political debate to the future relationship with swift agreement on both sides somewhat limiting the chaos.”

But the risk of a severe hard Brexit could lead to the break-up of the UK “through the unification of Northern Ireland with the Republic”, the ratings agency said, adding that this path would be drawn out.

“Growing disruption could shift the Northern Irish attitude toward unification; at the same time, it could also harden opposition, leading to a return of sectarian violence,” it said.

The ratings agency noted that the first Scottish referendum on independence was rejected by 55 per cent of voters, with some influenced by concerns that Scotland would lose its EU membership.

“Should the UK leave the EU without an agreement, that consideration would no longer stand in the way.”

In the 2016 Brexit referendum, 55.8 per cent of voters in the North and 62 per cent of Scottish voters chose to remain. Those results highlight the “difficulties with preserving the union”, DBRS said.

Aside from the political concerns that may result from a no-deal exit, DBRS also raised economic concerns, particularly given that the UK economy is “deteriorating” already.

“DBRS expects a period of significant economic weakening in a no-deal scenario, especially in a ‘severe’ hard Brexit scenario,” it said.

And while UK debt markets have thus far been resilient to shocks, Nicola James, co-head of global sovereign ratings for DBRS, said that negative rating pressure could arise from the “reduced size of the UK economy that could emerge from the break-up of the UK”.

While DBRS’s UK rating currently stands at AAA, the highest rating on long-term debt, it expects the break up of the UK to be a “credit negative” event which could possibly put pressure on that rating.

On the Republic, in a separate research note DBRS said the future assessments of the State’s credit quality will “consider the nature of the post-Brexit political arrangements, and how effectively authorities use macroeconomic policy tools to manage the fallout from the eventual Brexit outcome”.