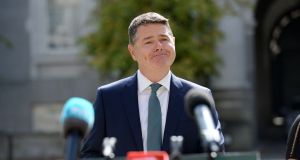 The Government is on course for another record tax take this year thanks to the ongoing windfall in corporation tax.

However, Minister for Finance Paschal Donohoe’s room for manoeuvre in next month’s budget may yet be curtailed if the UK opts to crash out of the EU without a deal. This is expected to result in a significant trade shock here and Mr Donohoe has pledged to shift his budgetary stance accordingly.

The latest exchequer returns for the eight months to the end of August show the business tax has generated a record €4.9 billion so far this year. This was €314 million or 6.8 per cent ahead of the Department of Finance’s own projections. It was also more than half a billion euro up on last year.

Corporation tax receipts have more than doubled since 2015 amid a huge transfer of multinational assets here in the wake of a global clampdown on tax avoidance and increased corporate profitability generally. They generated over €10 billion last year.

About 40 per cent of receipts, however, come from just a handful of firms, thought to include tech giants Apple, Microsoft, Dell, Google and Oracle.

The highly concentrated nature of the tax base therefore leaves the public finances exposed to changes in the international business environment.

The Irish Fiscal Advisory Council, the State’s independent spending watchdog, has criticised the Government for using the current boom to plug holes in its health budget.

“While there is much talk about the impact of future changes on our corporate tax take, the figures for the year to date, in particular over the summer months, would indicate that there will be another corporate tax surplus at year end,” Grant Thornton’s Peter Vale said.

“However our open economy puts us at the mercy of external forces; a continuation of current volatile global trading conditions could jeopardise any corporate tax surplus and leave the Minister looking elsewhere for additional revenues,” he added.

The latest exchequer figures show the Government collected just over €35 billion in taxes in the eight-month period to the end of August. This was €233 million (0.7 per cent) ahead of projections and 8.1 per cent or €2.6 billion up on last year, reflecting the ongoing growth in employment and activity across the Irish economy.

While the annual rate of employment growth slowed to 2 per cent or 45,000 in the second quarter, this was still positive and more people working means more income tax revenue for the Government. The figures show income tax raised just over €14 billion, which the department said was broadly “in-line with target” but were nearly 8 per cent or over €1 billion up on last year.

1 British exceptionalism backfires in style as Johnson tests positive for coronavirus
2 Wetherspoon’s panto-villain chairman may have the last laugh
3 UK needs to be honest about its Covid-19 strategy
4 Will Covid-19 force Primark to rethink decision not to sell online?
5 Volkswagen burning through €2bn in cash per week
6 Remote working doesn’t suit everyone, and it exposes woolly leadership
7 Mobile, broadband suppliers to be given extra radio spectrum
8 Rivian takes on Tesla with big batteries and subtler approach
9 ESB paying exchequer €88m dividend a pointless exercise
10 Usit travel group in liquidation due to coronavirus crisis
Real news has value SUBSCRIBE