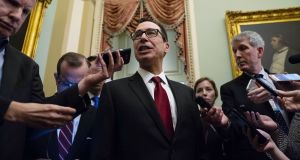 Steven Mnuchin, US Treasury secretary, speaks to members of the media after meeting with Senate Republicans on Capitol Hill. Photograph: Joshua Roberts/Bloomberg

The US Senate has voted to advance a motion to block the US Treasury’s decision to lift sanctions on Russian company Rusal, the owner of Aughinish Alumina, raising fresh concerns about the future of the Limerick plant.

In a shock development more than ten Republicans voted with Democrats to move ahead with a resolution to undo the US Treasury’s December decision which had been supported by Ireland and other EU countries.

The vote paves the way for a debate and vote on the Treasury decision in the US senate.

The development is a setback for Irish and EU efforts to persuade the US Treasury to rethink its decision to sanction three companies controlled by Russian oligarch Oleg Deripaska.

The Irish embassy in Washington along with other EU delegations had argued that the move would have unintended consequences on European and global aluminium markets.

On December 19th, the US Treasury agreed to lift sanctions on three companies controlled by Deripaska - a move that was warmly welcomed by the Irish government amid fears that the US clampdown on Rusal could ultimately affect the alumina plant Aughinish in Limerick which employs hundreds of people.

But Democratic opposition to the treasury decision had been growing in recent weeks and Congress had thirty days in which to voice opposition to the deal. In particular, focus has turned to Mr Derispaska’s ties to Paul Manafort, President Trump’s former campaign manager.

In a vote on Tuesday afternoon, more than ten Republicans broke with the Trump administration and voted with Chuck Schumer and Democrats to advance to a vote to block the Treasury decision.

This is despite the fact that Treasury Secretary Steve Mnuchin met with Republicans earlier in the day at their weekly lunch in Congress in order to set out the Treasury’s rationale for lifting the sanctions.

Speaking in the Senate ahead of the vote, senate minority leader Chuck Schumer said: “The case against the Treasury Department’s proposal is strong. This is a sham. It’s a sham to do a favour not only to Deripaska, but to Putin.”

On the eve of the vote, Mr Schumer said the decision to grant sanction relief was “deeply flawed and wrong.” He said the changes to the ownership structure of the companies secured by officials “fails to sufficiently limit Deripaska’s control and influence of these companies,” noting that other Russian interests with links to the oligarch will still yield considerable control, including his ex-wife and father-in-law.

“There is no doubt that Deripaska continues to control the company,” he said.

He also highlighted the links between Mr Deripaska and Mr Manafort, noting that last week it was reported that Mr Manafort passed on polling data to a close associate of Mr Deripaska during the presidential campaign.

“We don’t know what the special counsel Mueller knows, and the timing - at a time when these things are coming forward- to undo the sanctions on Rusal? Very suspect,” he said.

Given these circumstances, he urged the US treasury to revisit the decision.

“This is not the moment to give up a source of leverage against the Russian government.”