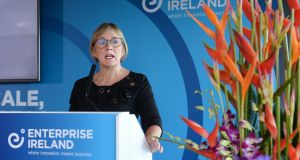 Brexit has yet to have a serious impact on Irish exporters but significant challenges lie ahead, Enterprise Ireland has warned.

Issuing its annual report, the State agency said on Wednesday that 85 per cent of client companies have taken action to protect themselves from the fallout of Britain’s exit from the European Union. Nonetheless, EI chief executive Julie Sinnamon said that some 25,000 Irish jobs are vulnerable to the impact of a hard Brexit, with the food sector at particular risk. Tariffs would be the biggest potential issue facing Irish exporters.

Enterprise Ireland said it is working intensively on a one-to-one basis with exporters to assist them with their Brexit contingency plans. It added it approved funding of €74million last year for those most exposed to Brexit.

The body announced a new drive on Wednesday to support exporters , which includes an expansion of its overseas network in 14 priority markets over the next 18 months.

Almost two-thirds of new roles were created outside Dublin, while the key sectors for jobs were in life sciences, construction and electronics.

Enterprise Ireland chief executive Julie Sinnamon said the agency remains on target to achieve 60,000 new jobs by the end of 2020.