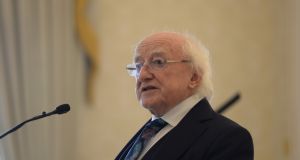 President Michael D Higgins has launched a blistering attack on what he describes as the prevailing doctrine of neoliberal market fundamentalism , claiming it has resulted in “unbridled consumption, yawning inequality” and a destruction of the natural environment.

He claimed that for almost 40 years mainstream economic commentary has espoused the virtues of privatisation and deregulation while maligning the role of the state.

“Government intervention of any kind has been met with a blinkered hostility by the mainstream commentariat, considered ideologically suspect, a waste of resources,” he told an economics seminar at Áras an Uachtaráin.

“It is depressing that, after centuries of economic thought and scholarship, we have become trapped in a political economy model of booms and busts, a model that is so socially damaging and iniquitous, a model with tenuous legitimacy, in terms of accountability, that now is posing a threat to democracy itself,” Mr Higgins said.

He claimed the populist backlash against mainstream politics seen in the US, with the rise of Donald Trump and in the UK with Brexit represented “an effective rebuke of the austerity-fuelled world view”.

“I believe that the neoliberal austerity mantra – invoked in order to restore growth, in its basic assumptions suggests that what is needed is to reduce deficits by cutting public spending – has been effectively refuted,” he said.

Even institutions such as the International Monetary Fund (IMF) and the World Bank have slowly moved in their thinking on austerity “from initial denial to now believing that it can be self-defeating”, he said.

The seminar, entitled Re-thinking Economics: The Role of the State, was attended by a number of leading economists.

Mr Higgins said the decisions of governments to cut spending during a downturn had turned short-lived recessions into fully fledged depressions.

This is “precisely what occurred in Ireland when the so-called ‘Great Recession’ of 2008 turned into an economic depression in 2009, a contraction that lasted for almost five years.”

“This prolongation and intensification of the economic bust resulted in a deepening of the experience of, as well as a widening of the exposure to, a range of attendant social ills – including mass unemployment, particularly among the young – that were a direct result of a protracted period of forced, constrained under-investment by the State, many of which have not yet been resolved,” he said.

“This has resulted in lost cohesion, for example in the European Union and its manifestation on the European streets, but now extended to every continent, the adjustment of the basic needs of the people, not only the poorest any longer, to the metrics of a global, financialised economy,” Mr Higgins said.