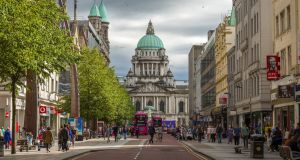 Companies in the North blamed “Brexit uncertainty” for yet another sharp fall in orders last month as their clients were reluctant to commit to new projects, new research shows.

“Northern Ireland remains rooted to the bottom of the regional league table for output and orders. Furthermore, local firms continue to see their input costs rise at faster rates than anywhere else in the UK.”

Mr Ramsey said last month’s Brexit deal had done little to reduce the level of uncertainty facing Northern Ireland firms, with many remaining “pessimistic” about the outlook for the next 12 months although some were decidedly more optimistic than they had been during September.

According to the latest Ulster Bank survey the drop in new orders for companies in Northern Ireland was the fastest fall recorded in the UK last month and this made businesses concentrate on existing projects which saw backlogs of work decrease for the 15th month in a row.

This in turn forced companies to lower their staffing levels and led some businesses to reduce their charges in a bid to win new orders.

1 Aryzta to pursue asset sales as takeover talks fail
2 Policy failed us during the banking crisis and it’s failing us again
3 Irish house prices could buck European trend and fall this year, says S&P
4 In praise of Gogglebox Ireland, an essential service in all but name
5 Liberties scheme aims to challenge Dublin docklands dominance
6 How much will a Covid-19 vaccine cost?
7 John FitzGerald: North needs reform more than unity
8 Dalata to open new hotel in Dublin’s Spencer Place
9 Help, I’ve no PRSI stamps – can I still get a pension?
10 Irish-based aircraft lessor gets court approval for creditor scheme
Real news has value SUBSCRIBE