Populism, free-trade zealots and the future of western democracy 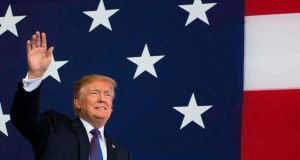 Trumpism: Given US hostility to any kind of welfare state it is unsurprising that nativism, populism and all the other isms are so evident. Photograph: Jim Watson/AFP/Getty

What’s to be done about populism? Explaining the rise of Donald Trump, Brexit, various European demagogues and neofascists, and Jeremy Corbyn has become, well, popular. That’s hard enough, of course, but not so difficult as figuring out how to solve the problem. If there is an impression that the rise of populism has been checked it is one that arises only because the global economy is booming. Just wait until the next recession.

Among thoughtful economists a clear theme has emerged, one that is put well by Martin Sandbu of the Financial Times: “The future of western democracies hinges on whether centrist political forces can offer an economic policy in which the left-behind can believe.” That’s a big claim: our political and economic futures rest on getting the response to populism right.

The Harvard professor Dani Rodrik pushes similar ideas. Globalisation and technological change lead to winners and losers. Economists mostly focus on the winners. Partly because that’s where the money and career prospects lie, but also because to pay attention to losers risks getting into bed with protectionists and socialists. In any event, losers haven’t been numerous enough to worry about and rarely cause very much trouble. Until recently, that is. Rodrik echoes Sandbu’s concerns about the future: “The world’s economic-political order appears to be at an inflection point, with its future direction hanging very much in the balance.”

The point about losers is an important one. Listening to free-trade zealots in the UK, for example, we might be forgiven for thinking that trade liberalisation is a win-win game. Economists have known for more than 60 years that this is simply not true. Lowering trade barriers always risks causing some harm, usually to unskilled workers. The key insight is that free trade is a good idea but is one that comes with large distributional implications: somebody’s job is lost. Choosing not to worry about this is all very well. But it is ethically unfair and politically stupid. As Hillary Clinton and David Cameron have discovered.

One simple idea is that the gains from globalisation should be better redistributed via taxation and welfare policies. Given the United States’ hostility to any kind of welfare state it is unsurprising that nativism, populism, Trumpism and all the other isms are so evident. Of course, some countries actually do redistribution quite well. Recent IMF data confirm that Ireland does as much or more than any other country to reduce income inequality.

Sandbu restates the ideas of the Nobel economics laureate Jean Tirole and argues that the welfare state should protect workers, not jobs. In other words free up the labour market to allow as much hiring and firing as companies want, but make sure that welfare payments and, critically, retraining measures are in place to provide economic security and maximum chances of finding another job. This is done in places like Sweden and Denmark. Supporters of Scandinavian and Nordic-style social democracy are often surprised by how easy it is for companies there to shed workers. By international standards Ireland’s labour market is also extremely flexible, although more “job activation” policies could be explored in the interests of helping the longer-term unemployed back to work.

The other main idea is rather more old-fashioned: economic policies should be fashioned to produce high growth rates so that wages actually begin to rise. It is a wonder of the modern age that so many countries have forgotten what high growth and tight labour markets look like.

Welsh Leave voters who complain the EU does nothing for them were told how much money Brussels gives them every year. A typical reply was, ‘I don’t believe those numbers’

Economics is one driver of populism. Thinking about the various initiatives, often involving large amounts of state aid, provided to poorer regions of Europe, I wonder whether the answer is simply “more”. Parts of south Wales are among the most economically deprived regions of the UK. But considerable amounts of cash do not seem to have had much impact. Populism, in the form of a Brexit-voting population, is all too evident. Recent research into why the Welsh valleys voted to leave the European Union revealed immigration to be the number-one concern. Yet foreigners make up only 2.2 per cent of the Welsh population, compared with 36.8 per cent in Remain-voting London. Welsh Leave voters who complain that “the EU does nothing for us” were told about the amount of money that Brussels gives them every year; a typical reply was, “I don’t believe those numbers.” The origins of beliefs are clearly important here, not just welfare payments. Both social and old media have a lot to answer for.

Simon Kuper of the FT brilliantly describes the Brexiteer wing of the Tory party in terms of modern-day followers of a “cargo cult”. Weird adherence to tribal mythologies leads to disastrous outcomes. How did these posh boys with their Oxford degrees find common cause with the Welsh working class? How did they persuade them to vote to be even poorer than they are now?

Brexit and global corporation-tax reform threaten Ireland’s economy. Perhaps the Irish advantage that IDA Ireland should market more heavily is Irish political centrism: populism isn’t a major part of the political landscape. That may become as attractive to a multinational as a low corporation-tax rate.