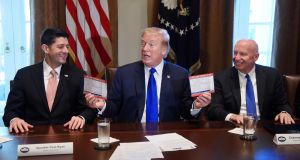 US President Donald Trump speaks while holding up “Simple, Fair, ‘Postcard’ Tax Filing” cards as US house speaker Paul Ryan, a Republican from Wisconsin (left) and Representative Kevin Brady, a Republican from Texas and chairman of the house ways and means committee, react during a meeting in the Cabinet Room of the White House in Washington. Photograph: Olivier Douliery / Bloomberg

Tax experts and company finance chiefs were scrambling last night to make sense of an obscure provision of the US tax reform package that could impose a 20 per cent charge on funds moving between parts of a business in the US and abroad.

Big multinationals based in Ireland are among those that would be hit by a crackdown on what US authorities see as tax avoiders that shift corporate profits out of the United States under the measures unveiled by Republicans this week.

Company lobbyists in the US who initially cheered the plan to cut the corporate tax rate from 35 per cent to 20 per cent are growing anxious over an anti-avoidance provision that they warn could cause wider collateral damage.

Their concerns illustrate the challenges facing Republicans as they try to overhaul the tax code for the first time since 1986, reckoning with corporate lobbying, budget constraints and President Donald Trump’s demand for a bill he can sign by Thanksgiving.

Bret Wells, a tax expert who recommended anti-avoidance measures to Congress last month, said they would hurt two groups of businesses: foreign-owned multinationals with US affiliates and US companies that used “inversion” deals to move their head offices overseas.

The Republican tax plan would impose a 20 per cent “excise tax” on payments between affiliates of the same company, payments that are commonly made as international divisions trade materials, services and royalties for intellectual property.

Irish companies employ nearly as many people in the United States as US businesses do here. It is unclear how many businesses would be affected if the proposed reform is voted into law. Indigenous companies like Glanbia and CRH among others would likely face significant challenges under the measures.

However, none were in a position to comment last night as tax advisers sought more details of how precisely the measure would impact business here.

The measure is also likely to encourage companies that have relocated their domicile to Ireland by way of corporate inversions to look again at their position.

Tax expert Peter Vale of Grant Thornton said it was too early to say definitively what impact the measures would have and whether what was being proposed was a return to the border adjustment tax abandoned earlier in the Trump presidency.

“It does look like it would be bad, possibly quite bad, but it is unclear just now. It’s also difficult to see how it would not also affect US multinationals,” he said. He added that it looked like the measures would aim, among other things, to persuade companies that had moved out of the US to bring their manufacturing operations back to the country.

“Yes, we have a new design to stop inbound, unwarranted deductions of expenses,” said Kevin Brady, the chief Republican tax writer in the House of Representatives, in response to a question from the Financial Times.

Without explicitly adopting Mr Trump’s “America first” rhetoric, Mr Brady, chairman of the house ways and means committee, has been pushing for ways to end perceived advantages he says the current tax code gives to foreign companies versus US corporations.

The excise tax would raise $155 billion over 10 years, according to Congress’s joint committee on taxation, curtailing what Republicans call the “erosion” of the US tax base and helping to pay for the sharp cut in the headline corporate tax rate.

Mr Wells, a professor at the University of Houston, said: “It’s a fairly expansive provision in the way it’s contemplated.”

He estimated that at present some companies could use tax-deductible payments between affiliates to shift as much as 30-40 per cent of their profits out of the US.

Lobbyists dispute the characterisation of multinationals as tax avoiders, arguing that such payments, also known as related-party transactions, are a legitimate and necessary part of internal supply chains that span the globe.

Nancy McLernon, president of OFII, a trade group for foreign companies in the US, said: “We’ve got to be very careful as we craft major tax legislation that might disproportionately impact international companies because US companies can be hit by retaliatory measures as a response.”

France is pushing for the EU to agree a new turnover tax on US tech groups to make it impossible for companies such as Apple and Google to cut their tax bills by moving profits between countries.

The Republican excise tax would have a limited effect on US tech companies. Although they use IP royalties to shift profits out of the US, their ability to do so is constrained by a provision of existing law that does not apply to foreign-owned companies.

One lobbyist said the excise tax would affect other US businesses, arguing it would hit carmakers importing components from their own factories in Mexico and retailers bringing in clothing from affiliates in China.

He said it recalled an earlier Brady proposal for a levy on imports – a border adjustment tax – which was killed by an outcry from importers. “In my view this is a border tax-lite proposal because you are taxing material being brought in to be sold in the US,” the lobbyist said.

A summary of the excise tax proposal from Mr Brady’s committee says “current law incentivises and subsidises the shift of American jobs overseas because additional functions performed abroad allow for greater deductible payments from US corporations to their foreign affiliates”.

It continues: “The provision would eliminate the US tax benefit afforded to multinational companies . . . by imposing full US tax on those profits irrespective of where they are booked.”

Mr Brady said the excise tax was “one of the areas we invite the most feedback in, because it’s a combination of some traditional ideas that have been talked about in the past with some new approaches”.

The Republican bill, which House speaker Paul Ryan says will also save money for middle class families, is due to be amended by lawmakers next week before a vote in the House. If it passes, it will then go to the Senate, where members are likely to want to make their own revisions.

OFII and other trade groups said they were still evaluating the impact of the bill as a whole. – Additional reporting The Financial Times Limited 2017