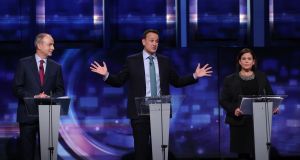 Voters want the parties to form a stable government with fewer than two in ten people wanting another general election, according to Business Post’s latest Red C poll

Voters want the parties to form a stable government with fewer than two in 10 people wanting another general election, according to the Business Post’s latest Red C poll. Some 26 per cent favour a grand coalition involving Fianna Fáil and Fine Gael and smaller parties. Another 26 per cent favour a Sinn Féin-led left-wing government, while 19 per cent of voters say they would prefer a coalition involving Fianna Fáil, Sinn Féin and smaller parties. Just 15 per cent saying they would prefer another election.

Paddy Power has warned a trade union that its representatives will be reported to the Garda if they enter its bookie shops to meet members, reports the Business Post. The company and the Mandate union have been in a long-running and escalating dispute which began when staff made claims that they were being forced to work without proper breaks in the company’s shops.

Pensions are in the spotlight on the business pages, with the Sunday Times reporting that Sinn Féin’s pension plan to crack down on so-called “gold-plated” pensions could easily be circumvented by higher earners, financial experts have warned. The Sunday Independent also reports that the ratio of pension savings to the size of the Irish economy lags well behind other developed countries, according to a new study. Pension assets as a proportion of GDP in Ireland are estimated at 48 per cent, much lower than the 126 per cent ratio in the UK, which has a similar pensions landscape.

The Sunday Independent publishes its rich list 2020, comprising the 250 wealthiest people in Ireland. Topped as usual by the Mistry family, followed by the Westons, it also records Stripe founders Patrick and John Collison jumping to third place with an estimated worth of €7.7 billion. The top 10 billionaires are now worth €53 billion, the paper reports.

The paper also reports that Microsoft is in talks to acquire a further 20 acres of land in order to construct a data centre and 120-person office development within Grange Castle Business Park in Dublin.

Hundreds of social housing units could lapse back into private ownership, according to the Business Post, as it says research shows several local authorities are leasing the properties from developers rather than purchasing them. It also reports that the result of the Sinn Féin surge in the election has led to big sales of the book, Home: Why public housing is the answer by Eoin Ó Broin, the party’s housing spokesman.

Boris Johnson has shelved plans to impose a “mansion tax” on owners of expensive homes in the UK, following a major backlash among Conservative MPs and grassroots, according to the Sunday Telegraph. It also reports that the UK’s Treasury had wanted to announce a nationwide revaluation of homes, which would have left millions of families with higher council tax bills. Both policies are “highly unlikely” to feature in the UK’s next budget, the paper reports. The paper also has a story on how some of HSBC’s best-paid bankers are among those facing the axe under a sweeping overhaul to be unveiled by temporary chief Noel Quinn.