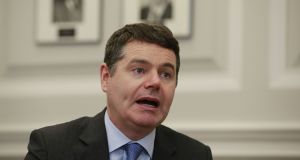 Minister for Finance Paschal Donohoe stressed that the Republic had changed its tax regime in line with OECD recommendations. Photograph: Nick Bradshaw

The Minister for Finance, Paschal Donohoe, said on Wednesday that multinationals shifted more profits through the Republic than all Caribbean tax havens combined because it attracted more jobs.

Mr Donohoe was responding to a report branding the Republic “the world’s biggest tax haven”, estimates that overseas companies moved more than €90 billion profit here in 2015.

“That’s because we have an economy that across that period has also attracted more jobs and more investment,” he said.

“If you look for example at the report that came out of the IDA, they showed that across that recent period we’ve seen the number of jobs in IDA-sponsored companies growing from 140,000 to in excess of 200,000.”

The research by academics at the Universities of Copenhagen and California, Berkeley found that multi-national profits moved through the Republic topped the Caribbean, where the total was €83 billion, Singapore on €60 billion and the €48 billion shifted through fellow EU state the Netherlands.

Mr Donohoe argued that the Republic had changed its tax regime in line with Organisation for Economic Co-operation and Development (OECD) recommendations.

“If you look at developments in our corporate tax code, over the last number of years now we have eliminated stateless companies, we are phasing out the double Irish,” he said.

He pointed out that the State earned the “highest rating possible in terms of transparency” in the OECD’s latest review.

Mr Donohoe noted IDA Ireland chief executive Martin Shanahan’s warning that the Republic should not grow complacent about competitiveness. “A competitive and transparent tax code is part of that,” he stressed.

The Minister also argued that the Dáil’s Public Accounts Committee needed to reflect on why it was calling for a review of the Republic’s corporate tax regime.

Mr Donohoe’s comments were echoed by members of the Irish Fiscal Advisory Council (Ifac), the Government’s financial watchdog, who were appearing before the Oireachtas committee on budgetary oversight.

Ifac member and economist Martina Lawless said on the basis of the OECD’s criteria for tax havens, which are internationally recognised, Ireland was not one.

She also noted that the study took a list of tax havens that had been put together by academics in the 1990s drawing on data from the 1980s.

“The issue there was they took Ireland’s export tax relief which was zero per cent in the 1980s as indicative of special treatment of multinationals,” she said.

“It wasn’t evidence of special treatment of multinationals as it applied also to sales by domestically-owned exporters, and in any event that tax relief has long since been phased out,” she said.

Ireland is a big base for foreign direct investment, she said, “but that is not – in and of itself – evidence that the country is a tax haven”.

Ms Lawless said, however, there was a perception that Ireland may be competing unfairly for activities, particularly digital activities, where it is hard to distinguish the source of sales versus where the value is being created. “This is a concern for Ireland’s international image,” she said.

1 Chris Johns: Boohoo exposed on pay and conditions in digital economy
2 In this strangest of recessions, what happens next for Ireland?
3 Hotel bookings collapse in wake of additional Covid restrictions
4 O’Flynn Group in bid to build 1,137 homes on Dublin’s Naas Road
5 Should I switch bank now with Ulster Bank at risk of closing?
6 Bank of Ireland sees about 2,000 staff apply for voluntary redundancy
7 Estée Lauder staff at Dublin airport plan further strike action
8 Air travel never going ‘back to way it was’
9 Michael O’Leary is the boss you want to lead an airline out of crisis
10 The wealth of the Irish – how do your assets match up?
Real news has value SUBSCRIBE