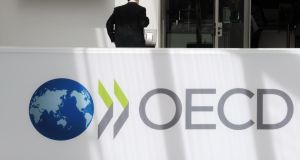 Retirement age should reflect increased life expectancy, according to an expert who warns that State finances will come under increasing pressure as the Republic’s population grows older.

Moves to increase the State pension age to 67 sparked controversy during the general election, forcing Fine Gael and other parties to row back from a position that had general political support when introduced in 2011.

Laurence Boone, chief economist with the Organisation for Economic Co-operation and Development (OECD) on Thursday said the think tank advises every country that “retirement age should evolve with life expectancy”.

The State faces a sharp rise in pension and healthcare costs over the next 10 years as the number of people aged over 65 living in the Republic increases, the report, OECD Economic Surveys: Ireland 2020, warns.

Ms Boone told the Institute of International and European Affairs that her organisation believes that by 2030, the problem could lead to an increase in public spending by 1.5 per cent of gross domestic product (GDP), a measure of all the wealth the Republic creates.

To combat this, the State needs to spend money more efficiently and find extra sources of revenue, the organisation says. Ms Boone pointed out that the OECD recommends that countries “need to help people stay in jobs beyond the age of 55”.

The OECD predicts Irish GDP will grow by 3.6 per cent this year and 3.3 per cent in 2021 while unemployment, now about 5 per cent, will fall to “historically low” levels.

The OECD notes that recent corporate tax windfalls boosted State coffers, but the Government used the cash to cover overspending on health and welfare.

“Going forward, the government should commit to transferring windfall tax revenues to pay down general government debt or to the rainy day fund,” the OECD report says.

The OECD warns that competition from other countries, and its own efforts to reform global tax rules, could make the Republic less attractive to the multinationals that are boosting exports and creating jobs.

“This highlights the importance of fostering technological adoption and productivity in domestic firms as well as further skill improvements in the workforce,” the document says.

Ms Boone said that the organisation’s own talks to level the global tax playing field among 137 different member countries, were progressing.

“I think the target is to have something by the end of this year or early next year,” she said.

Coronavirus: how hard has Ireland’s economy been hit by pandemic? 13:27
Virgin Media takes on extra staff due to unprecedented demand 12:59
BA in union talks to suspend around 32,000 staff - source 12:55
EU court says short-term lets can be required to get official sanction in housing crisis 11:47
Start-up funding nosedives in Covid-19 crisis but fintechs to flourish 11:34