No evidence of another Irish housing bubble, IMF says 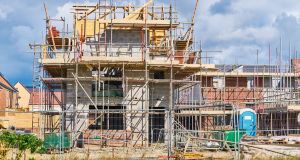 The current momentum in prices and mortgage credit in Ireland’s housing market is significant and requires close monitoring, the IMF said. Photograph: iStock

Despite a rapid acceleration in property prices and a surge in mortgage approvals, the International Monetary Fund (IMF) has said there is no evidence of another housing bubble forming in the Irish economy.

In its latest annual assessment, the Washington-based fund, however, warned that the current momentum in prices and mortgage credit was significant and required close monitoring.

It also suggested that recent changes to the Central Bank’s mortgage lending rules and the introduction of a help-to-buy scheme for first-time buyers had added “impetus” to the market.

In their analysis of the Irish economy, staff at the fund said strong demand for housing was likely to be sustained in the period ahead because of improvements in the labour market and the ongoing reduction in household debt.

While there was no clear evidence of a “significant price misalignment” in the residential property market, it concluded that “persistent pressures could lead to imbalances, particularly given the lagged supply response”.

In its report, the IMF also warned of the need for the Government to adopt a prudent fiscal stance in upcoming budgets “to build buffers and reduce public debt further” especially in light of the risks posed by Brexit and US tax reform.

While subject to large uncertainties, it said the impact of the Brexit on Ireland was expected to be negative and significant.

“A possible slowdown in the UK, accompanied by sustained weakness in sterling, would affect the Irish economy through labour, trade and financial channels,” it said, while noting the possible relocation of UK-based companies to Ireland might act as a mitigating factor.

In its report, it listed the new public-sector pay deal as a significant expenditure pressure for the Government, suggesting the overall wage bill for civil servants remained “comparatively high” as a share of both revenue and expenditure.

It suggested Ireland should continue to broaden its tax base and, just days after the AIB stock market flotation, urged the State to save temporary revenue windfalls rather than deploy them as part of current expenditure.

Overall the IMF’s assessment of the Irish economy, however, was positive with analysts noting Ireland was once again among the euro area’s top growth performers in 2016 while bank balance sheets were continuing to recover from the crash.

Minister for Finance Paschal Donohoe welcomed the report, saying it affirmed “the exceptional turnaround of the Irish economy”.