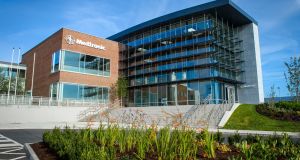 According to this year’s The Irish Times Top 1000 2017 survey, the definitive view on corporate Ireland which is published on Friday, Medtronic, the Dublin headquartered medtech company, is the most profitable company in the country, with profits of a massive €4.1 billion, putting it comfortably ahead of the Central Bank which in second place on €2.3 billion.

Both AIB (€1.7 billion) and Bank of Ireland (€1 billion) as well as Nama (€1.5 billion) also make the top 10 when it comes to profitability. And the true scale of profits may be even higher, given that companies such as Apple, Intel and IBM don’t report financial results for their Irish entities.

When it comes to the overall list, CRH has retained its position as the largest company in Ireland with a 15 per cent rise in turnover to €27.1 billion, ahead of Medtronic, Google and Microsoft.

But it’s not just the larger companies that are growing fast; one of the more heartening aspects of the survey is the number of smaller companies – with a turnover of less than €100 million – posting significant growth rates.

Software firm Intercom, for example, is one of the fastest-growing companies in Ireland, increasing its turnover by a massive 135 per cent to €47 million, while on the manufacturing side, toy company Hasbro Ireland’s sales jumped 126 per cent to €38 million.

Against a background of growing concern about the exchequer’s dependence on a select group of multinationals for as much as 50 per cent of corporation tax revenues, the survey also reveals that the top 10 taxpayers in the survey, led by Medtronic and CRH, tax paid some €2.9 billion in tax.

Last year the country’s total corporation tax haul was €7.4 billion, and while not all of these companies total tax bills will be paid in Ireland, it nonetheless offers an insight into who the biggest tax payers may be.