The Tory beating at the polls? Blame the economy

London Briefing: Cost of living in Britain at four-year high and earnings are down 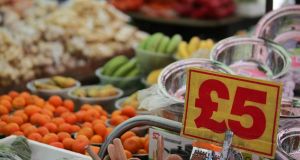 British inflation soared close to a four-year high in May. Photograph: AFP

Despite the endless post-mortems, recriminations and soul searching, there’s no single, simple reason to explain why the electorate turned against Theresa May’s Tory party so spectacularly last week.

Anyone still searching for an answer should take a close look at Tuesday’s inflation figures, which showed the cost of living soared to a four-year high last month.

Reflecting the slide in sterling since last year’s Brexit vote, consumer price inflation hit 2.9 per cent in May, even higher than the City had been expecting, and well above the previous month’s 2.7 per cent.

As well as overshooting the government’s target of 2 per cent, it also outstripped the Bank of England’s forecast that inflation would peak at 2.8 per cent by the end of the year. It won’t take much now to push the cost of living through the 3 per cent level, something some City forecasters expect to see within weeks.

The next clue to the deep discontent of the nation will come on Wednesday when government statisticians release the latest earnings figures. These are expected to show a slowdown to 2 per cent, widening the gap with inflation, further reducing real wages and intensifying the squeeze on already-stretched household budgets.

As Tim Roache of the GMB union put it, there is “more month than money” left over after payday for millions of households. Calling for an end to the public sector pay freeze, Roache said: “If the prime minister is to take anything away from her election embarrassment, it should be that people are fed up.” Even the out-of-touch Ms May, now loosely in charge of a minority government, will have worked that out for herself by now.

A year ago, before the Brexit referendum, the pound was worth $1.50 and inflation was running at just 0.3 per cent. Now the pound is trading at $1.26 and the price of imported goods has spiralled.

At first, retailers did what they could to absorb price rises themselves, and they were helped in most cases by having hedging arrangements in place. But now those higher costs are being passed on to the consumer.

A breakdown of the inflation data shows some of the biggest price rises came in the cost of package holidays abroad, as well as imported computer games, toys, clothing and food.

According to the TUC, working people are still £20 a week worse off, on average, than they were before the financial crisis. Shoppers are already responding to the squeeze by spending less – earlier in the week, figures from Visa showed households had cut back on their spending for the first time in almost four years.

Belt-tightening was in evidence across the board, Visa said, with falls in food, clothing, transport and household goods. The overall drop in spending was 0.8 per cent year-on-year, the first fall since September 2013.

Households have also been trading down – recent data on the grocery sector showed shoppers are turning in increasing numbers to discounters, with Aldi and Lidl pushing their combined share of the market to a record 15 per cent. There was also a big increase in sales of supermarkets’ cheaper, own-label ranges.

Consumer spending, the main driver of the UK’s economic growth, has held up remarkably well since the shock referendum result but the squeeze on earnings is clearly starting to take its toll.

Economists are increasingly fearful of the effect the current political turmoil will have on consumers, and the UK economy, which is already the worst-performer in the European Union with GDP growth of just 0.2 per cent over the first quarter.

Britain is already in the grip of the longest period of falling real pay in more than two centuries, according to the Resolution think-tank. Resolution’s Stephen Clarke, noting that there is still no sign of pay settlements responding to higher inflation, warned that the renewed squeeze on pay is likely to be longer and deeper than many originally expected.

All of that will make for some interesting discussions at the Bank of England’s Monetary Policy Committee, which is due to announce its latest decision on interest rates on Thursday.

There’s no expectation of a rate rise this time round. The cost of living may be rising faster than the bank expected, but governor Mark Carney has long made it clear that Threadneedle Street is prepared to “tolerate” rising inflation, preferring to keep rates at their record low of 0.25 per cent in an effort to boost the economy and protect jobs.

Given the current state of political turmoil, there’s little reason for the bank to change course now.