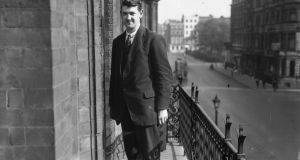 Michael Collins in London for the Treaty negotiations in 1921. Photograph: Hulton Archive

In the divorce between the UK and the EU, a painful part of the negotiations will be the discussion on the division of assets and liabilities. However, it is a necessary part of the process of leaving a union, and there are precedents for such settlements from past consensual break-ups.

The Irish divorce from the UK in 1921 was unusual at the time because, in spite of considerable “domestic violence” in the run-up to the agreement, the actual divorce was part of an agreed settlement as set down in the Treaty. In December 1921 the treaty between Ireland and the UK provided in article 5 that Ireland would accept a liability for a share of the then very large UK national debt. The precise amount was to be determined by international arbitration. Thus both parties accepted that the divorce settlement involved an agreement on division of pre-existing assets and liabilities.

A few years earlier Poland, Finland and the Baltic republics had obtained independence from the former Russian empire. However, their independence was not part of an agreed process – they “escaped” as a result of revolutionary chaos, without any share of Russian debt. After the break-up, the USSR itself defaulted on the debts of the Russian empire.

In the Irish case, subsequent to the treaty, further negotiations took place on Ireland’s liabilities. Instead of going to international arbitration, on December 3rd, 1925, an agreement was reached between Ireland and the UK. As part of this agreement the UK wrote off most of Ireland’s potential liabilities under the Treaty, with the exception of a residual sum of £5 million. However, as with the promissory note deal 90 years later, the burden of this £5 million was further reduced by an agreement to repay it over 60 years at a low interest rate. Finally, at a meeting between the Irish minister for finance, Charles Haughey, and UK ministers in February 1969, the UK wrote off the remaining £2.9 million of this debt.

More recently, when Czechoslovakia broke up into the Czech Republic and Slovakia in 1993, the two new countries reached an amicable agreement to share the national assets of the former Czechoslovakia. These assets included embassies, as well as rail and airline infrastructure.

Before the last independence referendum in Scotland, it was clear that an independent Scotland would have to take on its share of the UK national debt. However, in that case there was less discussion of how the UK’s assets, such as embassies, would be divided out.

Thus, in the past, it has been normal for amicable national divorces to involve settlements concerning assets and liabilities, even if there was no question of alimony. The UK’s impending divorce will be no different. The EU has prepared an itemised list of EU assets and liabilities. It appears that the total liabilities could amount to €100 billion, although a figure of €60 billion has been discussed publicly as being the UK’s ultimate net liability.

Although €60 billion would be a large sum for Ireland – the cost of the bank bailout – it represents only 2.5 per cent of UK GDP. (It is also the amount that was added to the UK national debt two years ago as a result of a mistake by the then Conservative government in how it regulated voluntary housing associations.)

From the UK point of view, this is a relatively small amount of money, certainly relative to the ultimate impact of Brexit. However, it is still looming as a big issue for the negotiations. For the EU it is an even smaller sum relative to the income of the EU. Ireland’s share of any transfer would amount to about 0.3 per cent of Irish GDP.

While the relative significance of the UK’s residual liabilities to the EU may be small relative to income for all involved, there is a danger that negotiations on this issue could derail the talks. Issues of principle could trump mutual interest in reaching a wide-ranging agreement. If this looked like happening it might be a good idea to adopt the century-old model of the Anglo-Irish Treaty.

If guidelines for determining the assets and liabilities of the EU could be agreed, the final settlement of what the UK is liable to pay could be determined by international arbitration. As the “empire on which the sun never set” adopted such an approach in 1921, it should be acceptable to the UK today. It could also facilitate the EU in progressing the talks.