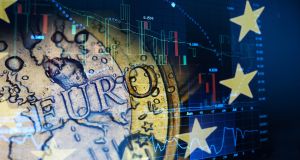 Average prices charged for goods and services increased at the weakest pace in five months in June. Photograph: iStock

The euro-area economy recorded its fastest expansion in six years in the second quarter even as momentum eased in June due to weakening services activity.

The report comes two weeks after the European Central Bank said risks to the economic outlook were broadly balanced and no longer tilted to the downside. The recovery is broadly based and companies are adding jobs at a brisk pace amid strong optimism about future growth, IHS Markit said.

“Although the PMI data point to some loss of growth momentum in June, the latest reading needs to be looked at in the context of recent elevated levels,” said Chris Williamson, chief business economist at the London-based company. “Despite the June dip, the average expansion in the second quarter has been the strongest for over six years and is historically consistent with gross-domestic-product growth accelerating from 0.6 per cent in the first quarter to 0.7 per cent.”

Highlighting a conundrum faced by the ECB that accelerating growth is failing to translate into faster inflation, Markit said average prices charged for goods and services increased at the weakest pace in five months in June.

“Despite the rise in employment, the surveys found some evidence of growth being constrained, especially in manufacturing, where supply delays have spiked to the highest in six years in recent months,” Williamson said. “However, with prices for many globally-traded commodities falling, notably oil, price pressures continued to ease in June.” – (Bloomberg)

1 Should I switch bank now with Ulster Bank at risk of closing?
2 Tick all the right boxes when it comes to your house insurance
3 Will brother’s widow get half of our parents’ estate when they die?
4 Belfast mailbox address used by account holder in Russian money-laundering scheme
5 Aldi empire wracked by family feud
6 Swiss drug giant Roche pays €380m for Irish biotech Inflazome
7 EU watchdog calls for end to Covid loan payment breaks
8 Diarmuid Ó Conghaile appointed State’s new aviation regulator
9 ‘I have three children and a dog, so I feel like a bit of a human ATM’
10 Finance Ireland refinances mortgages with low level of payment breaks
Real news has value SUBSCRIBE