Arab export markets could be worth €9bn to Irish companies 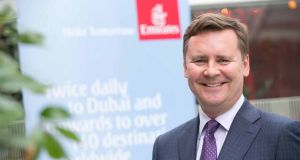 Enda Corneille, Ireland manager of airline Emirates, said his company’s craft regularly fly out a range of goods in their cargo holds, such as beef, eggs, and medical products.

Irish exports to the Arab world could more than double to €9 billion in coming years opening opportunities for a range of industries including food, pharmaceuticals, aviation and technology.

The third Arab-Irish Business Forum will take place in Dublin’s Mansion House on Wednesday October 3rd featuring speakers who will talk about their experiences of a market that stretches from North Africa to the Gulf.

Ahmad Younis, chief executive of the Arab-Irish Chamber of Commerce, one of the event’s organisers, pointed out at the weekend that the area’s population is bigger than the EU, and Irish businesses already have a foothold there.

“For example, Saudi Arabia is the third largest non-EU destination for Irish exports, only behind the US and China, ” Mr Younis said at the weekend.

Irish businesses sold €4.3 billion worth of goods and services to Arab countries in 2016. The chamber estimates that this could grow to €9 billion over the next two decades.

Food is one of the main exports to the region. For example, Mr Younis noted that baby formula accounts for a large amount of exports to Saudi Arabia. Arab countries import up to 90 per cent of their food. In the case of Qatar, this rises to 100 per cent.

Enda Corneille, Ireland country manager of airline Emirates, which is backing the conference, explained that his company’s craft regularly fly out a range of goods in their cargo holds, such as beef, Nestbox eggs, Keogh’s crisps, ice cream and medical products. “They are all going out on the aircraft,” he said.

Irish exports include services as well as goods. ESB International, the consulting arm of the State-owned energy company, has a strong presence in the region, Peter Jackson, Enterprise Ireland’s senior market advisor for the Gulf Region added.

Along with that, Aer Rianta International, the multi-national retail arm of State airports company, DAA, which runs terminal five at Riyadh International Airport in Saudi Arabia. Others in the services sector include Dublin City University and Glenbeigh Construction.

According to Mr Younis, there are opportunities for companies from multi-nationals to small businesses. Quality is a key to many of the markets, so Irish food and healthcare products, which have reputation for meeting high standards have an advantage.

Mr Younis pointed out that Irish people have an advantage when it comes to doing business in the Arab world, as many deals spring from developing personal relationships. An emphasis on family and social life in both cultures means they share common ground.

“Arabs like doing business with the Irish,” he explained. “It’s all about gaining trust and spending time, it requires patience but it’s worth it.”