Cancel the budget until we get more clarity on Brexit

Chris Johns: The banking crisis reminds us how ‘events’ disrupt even the best-laid plans 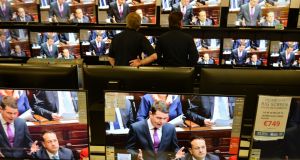 What should the Government do, particularly in the context of the budget? Photograph: Alan Betson

How should the Government prepare for Brexit? With the budget now a matter of days away, it is only to be expected to hear calls for the Irish economy to be “Brexit-proofed”. As we celebrate – I use that word carefully – the 10th anniversary of the bank guarantee, we are reminded of the capacity for “events” to disrupt even the best-laid plans and devastate a seemingly fast-growing economy.

We know another big event is coming, so it would be reasonable to suggest that we should get ready for it as best we can. Whether or not we could have foreseen and prepared for our own version of the financial crisis is now mostly a matter for historians. To repeat: this time we know, for sure, that something very big is about to happen, something that is bound to have economic, political and social consequences, potentially large and profound ones. Maybe even catastrophic. What should be done now in anticipation of all of this?

It would help if we knew a few of the details. Beyond vague generalisations – something big is coming our way – it is an extraordinary fact that we cannot say much else. With six months to go, negotiations between the EU and the UK are at an apparent impasse with the probability of no deal at an uncomfortably high level.

What do we know? There are three important documents either in the public domain or being negotiated (with each draft instantly leaked – that’s another extraordinary aspect of the Brexit circus). First, there is the infamous Chequers white paper: Theresa May’s vision what the post-Brexit world will look like. The only person who seems to like these proposals is the British prime minister. Second, there is the withdrawal agreement, a legally binding text that essentially is about how we get from here to transition. This is mostly agreed, apart from the rather large problem of the Irish Border. Third there is the political declaration, an aspirational rather than legally binding text, that it is hoped will contain enough waffle to enable Theresa May to get the withdrawal agreement through British parliament.

There are many rows being had about the three documents, not least the extent to which the contents of the Chequers white paper and the political declaration relate to each other. Hopes for a deal mostly rest on the latter being vague enough – papering over the fact that Chequers is a non-starter – such that the negotiations can start all over again once we get to the transition phase after Brexit on March 29th next.

All of this is about mind-numbing detail. So if you don’t like detail you have already switched off. But it is the job of politicians to pay attention to details. Boris Johnson now says he made a mistake signing up to the Border backstop when he was a cabinet minister, and that the UK government, of which he was a part, should have made more efforts to prepare for Brexit. There is a terrific YouTube video link of him being interviewed last week by Robert Peston of ITV about supply chains and just-in-time inventory management. Peston’s slightly hysterical laughter at Johnson’s answers is instructive. Johnson is now in the vanguard of a push for a “Canada-plus” deal that ignores the Border question and a thousand other details.

Ignoring Johnson’s counterproposal, Theresa May says that the only choice is now between Chequers and no deal. Pure logic dictates that this means no deal. That’s the potentially catastrophic outcome for Ireland. A pure no-deal scenario is the one where planes don’t fly, financial derivative trading jams up, medicine imports are severely curtailed and southeast England becomes a lorry park. So a pure no deal is impossible: various mini-deals, all last minute, will have to be agreed to enable the planes to stay in the air.

Pragmatists (hopeless optimists?) observe that the UK government is split between two extreme views: Brexit in name only, or the Johnson option. The middle ground, Chequers, has only one supporter: the prime minister. The only hope, therefore, is that, as both extremes hate the white paper, it is the only chance of compromise. We can only shake our heads in wonder.

The upshot of all this is that right now we know next to nothing about the likely shape and impact of Brexit. We remain aware of impending big events but cannot describe them in any meaningful way. Which brings us back to the question: what should Irish Government do, particularly in the context of the budget?

It is, perhaps, a contradiction in terms to say that we can prepare for a surprise. A pragmatic suggestion might be to wait and see: react when we know more rather than jump at shadows now. At the same time, do what we can now to give us as much fiscal flexibility when we might need it. Brexit will either be bad or very bad for Ireland.

So my suggestion is this: cancel this year’s budget. Just let the current fiscal parameters – spending and tax – run as they are. Give the economy the stability it craves, the stability that could be so badly disturbed over the next few years by events. And then react as best we can.