No chicken tonight is our Image of the Week

Planet Business: US media’s ‘catch and kill’ and a Facebook executive’s tweetstorm 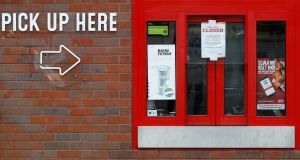 Complex business: A closed sign hangs on the window of a drive-thru KFC restaurant in Coalville, Britain, on Monday. Photograph: Darren Staples/Reuters

Sum in euro that bookmaker William Hill has been fined in the UK for breaching anti-money-laundering and social responsibility regulations.

Number of William Hill customers who were able to deposit money linked to criminal offences after its management “failed to mitigate risks”.

Deposit made over a 14-month period by one customer, after William Hill assumed he was earning £365,000 a year. He actually earned £30,000 a year and financed his gambling habit by stealing from his employer.

Image of the week: No chicken tonight

“Chicken chaos” threatened to sink fragile morale in Brexit Britain this week as fast-food chain KFC was forced to close more than half of its 900 outlets after delivery problems meant they ran out of the “C” in “KFC”. The fried chicken purveyors blamed “operational issues” following a switch to a new logistics provider with DHL. “The chicken crossed the road, just not to our restaurants,” KFC said in its Twitter apology. “We’ve brought a new delivery partner onboard, but they’ve had a couple of teething problems – getting fresh chicken out to 900 restaurants across the country is pretty complex!” Luckily, restaurants in Northern Ireland, like those in the Republic, were open as usual. Think of the episode as a test run, or a metaphor, for a future in which the North enjoys continued poultry-laden membership of the single market while Britain languishes outside of it, hungry for tariff-free, non-chlorinated, pre-Brexit chicken.

The lexicon: Catch and kill

“Catch and kill” is a term used in the US media to describe a dubious practice whereby a publication buys the rights to a story and then buries it as a favour to someone. This, according to a report by Ronan Farrow in the New Yorker, is what the National Enquirer did to conceal an extramarital affair by Donald Trump. The New Yorker claims that ex-Playboy model Karen McDougal is legally barred from speaking about an affair with Trump because she signed a $150,000 “life-story rights agreement” granting the Enquirer’s parent company exclusive ownership of her account, which it never published. David Pecker, publisher of Enquirer-parent American Media, is a mate of Trump’s. American Media says the suggestion it “engages in any practice that would allow it to hold influence over the president of the United States is laughable”. Well, it’s good to laugh.

Getting to know: Rob Goldman

Rob Goldman belongs to what was once a lesser spotted breed: Facebook executives who are active on Twitter. Alas, Goldman, a Facebook vice-president for advertising, has used the rival social media platform to generate a headline-making tweetstorm. After special counsel Robert Mueller published his indictment of 13 Russian operatives for interfering in the US election, Goldman declared that “the majority of the Russian ad spend happened AFTER the election” and that this hadn’t been covered because it didn’t align with “the main media narrative” of Trump. The US president soon seized on Goldman’s supportive thread while, behind-the-scenes, Facebook – knowing Russian interference went far beyond purchased ads – cringed. “Nothing we found contradicts the special counsel’s indictments. Any suggestion otherwise is wrong,” said Facebook vice-president of global public policy Joel Kaplan. Translation: Think before you tweet, Rob, you idiot.

It hasn’t exactly been a brilliant start to 2018 for all publicly quoted companies, as this selection of profit warnings, issued since the cold light of new year, confirms.

1. AA: The roadside recovery and insurance group saw its share price plunge this week after warning that its profits won’t live up to expectations, thanks to investment in its breakdown business. It wants to be able to predict car trouble before it actually happens.

2. Mothercare: Everyone love babies, but not everyone loves baby goods retailer Mothercare, which is having difficulty coping with bigger and stronger online competition.

3. Capita: The British outsourcing group is trying to avoid becoming “the next Carillion”, but it was forced to issue a profit warning just weeks after its rival collapsed under a weight of debt.

4. Laura Ashley: The fragrant fashion and home furnishings retailer is no stranger to the profit warning, with its most recent one the third in 12 months. Will a move into the hotels and tea-rooms business help?

5. Dignity: Not even in death can Dignity escape financial grief. The listed British funeral provider was branded a “zombie stock” earlier this month after a funeral price war obliged it to cut its prices by 25 per cent. No flowers please.