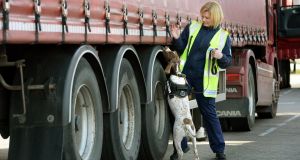 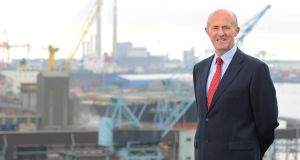 Dublin Port chief executive Eamonn O’Reilly said on Wednesday he could not wait for political solutions. 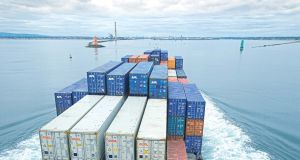 The number of non-EU freight units passing through Dublin Port is expected to rise from 200,000 to 1 million from March 2019.

Dublin Port is expecting a hard Brexit and will apply for planning permission to construct the new infrastructure it expects will be required to deal with additional customs checks from next year, according to its chief executive.

Cargo volumes at the port hit a new record in 2017 as 36.4 million tonnes passed through the facility. Some stakeholders have suggested that additional checks at the port in the event of the UK leaving the customs union could lead to 9km tailbacks outside.

Dublin Port chief executive Eamonn O’Reilly said on Wednesday he could not wait for political solutions, and was planning for the UK’s exit from both the European single market and the customs union.

“Our view always was that the British government has clearly said they are leaving the customs union and the single European market,” he told The Irish Times. “We’ve taken that as our starting point here in Dublin Port. We have to be ready for March 2019.

“The second point is that there was clearly a lot of uncertainty around the land border. Some clarity came in December. From our point of view, it became clear that the sea border remains a different matter.

“We have to put in place border controls that are required by various State agencies. We’ve been in discussions with the Office of Public Works (OPW). All of the State agencies now understand what they require in Dublin Port.”

Mr O’Reilly said the port hosted the first of three workshops with stakeholders on February 1st. The meeting was attended by the OPW, customs officials, the Garda, the Department of Agriculture and Food, the HSE, all of the shipping lines and a group of the “large hauliers”.

Mr O’Reilly said all were working from “the same template” in terms of preparations, and that the necessary infrastructure required by each would be signed off by the end of March.

“We will then apply for planning permission and we will construct what is needed,” he said. “This is not huge engineering, but it has to be there. What we need to put in will cost us in the single millions.

“We’re talking booths the trucks will drive by, canopies, inspection areas, sheds where goods can be taken out and inspected. It’s the sort of stuff that would have been here in the early 90s before the single market came in.

“The extra bits that are needed in terms of border controls are all down to systems and processes and those already exist in Dublin Port.”

Some 1.3 million freight units – or containers – pass through the port each year, with 200,000 of those coming from outside the EU. Mr O’Reilly said this figure would jump to 1 million in March 2019 when the UK leaves the bloc.

“The 200,000 units go through three container terminals at the moment,” he said. “The new units will go through four other terminals. Without doubt, there will have to be additional customs inspectors. There is extra administration required.

“It will increase the amount of overheads within the system. That’s the nature of border controls. It’s the opposite side to the benefits of when the single European market was set up.”

However, Mr O’Reilly said he was sure the port would still run smoothly in spite of the additional checks.

“I’m very confident we will have all the infrastructure, systems and processes in place to keep UK trade moving through the port efficiently once the clock goes to midnight in March,” he said.

“We won’t be seeing the 9km queues the British and Irish Chamber suggested. It’s an irritant for us necessitated by the decision of the UK to leave the EU, and it’s the last thing we wanted to have to do, but we will be ready.”