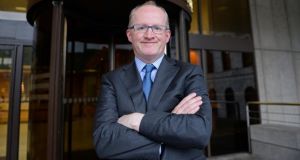 Central Bank governor Philip Lane said there were “very clear areas for improvement such as leadership and clarity on strategy and direction”. Photograph: Eric Luke

Central Bank governor Philip Lane, who is in the middle of a two-horse race for a key European Central Bank (ECB) position, has acknowledged to his 1,800 staff that the organisation in Dublin has work to do to improve “leadership and clarity on strategy”.

The comments were made in an internal message last week after the results of a staff survey fell short of the score needed for the Central Bank to be accredited as a Great Place to Work. The overall result of the survey was 57 per cent positive responses, based on research firm Great Place to Work’s methodology, and well short of the 70 per cent needed to for certification.

“Our participation in the survey is the first step of a three-year journey, working towards accreditation as a Great Place to Work,” said Mr Lane told the bank’s staff in the email, seen by The Irish Times.

“You have given positive feedback in some dimensions such as learning and development, aspects of work/life balance, diversity and corporate social responsibility. However, there are also some very clear areas for improvement such as leadership and clarity on strategy and direction.”

Mr Lane, who became governor of the Central Bank in 2015, will learn on Tuesday whether he has secured the necessary backing from euro-area finance ministers for his candidacy for the position of ECB vice-president, as incumbent Vitor Constancio prepares to step down in May.

While a number of countries, including France, Portugal, Malta, Slovakia and Latvia, have indicated they intend to back Mr Lane’s only rival for the position, Spain’s economy minister Luis de Guindos, members of the influential European Parliament economics and monetary committee mainly favour Ireland’s first candidate for an ECB executive board position. Roberto Gualtieri, chairman of the committee, said on Thursday that most members considered Mr Lane’s “performance more convincing”.

The results of the Central Bank survey show that 43 per cent of respondents agreed that management had a clear view of where the organisation was going, rising to 61 per cent when staff were asked if they would be confident that raising any wrongdoing would be addressed.

However, only 38 per cent agreed that people in the bank “avoid politicking and backstabbing as ways to get things done”, and 32 per cent believed “people around here are really innovative”. Fewer than half of the respondents agreed that the organisation would act on the results of the survey and 37 per cent said promotions went to those who best deserved them.

While only a quarter of respondents believed that “appropriate action is taken when dealing with poor performers”, 71 per cent believed staff were treated fairly regardless of their age.